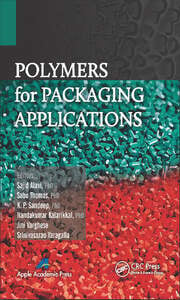 This book focuses on food, non-food, and industrial packaging applications of polymers, blends, nanostructured materials, macro, micro and nanocomposites, and renewable and biodegradable materials. It details physical, thermal, and barrier properties as well as sustainability, recycling, and regulatory issues. The book emphasizes interdisciplinary research on processing, morphology, structure, and properties as well as applications in packaging of food and industrial products. It is useful for chemists, physicists, materials scientists, food technologists, and engineers.

Sabu Thomas, PhD, is a professor of polymer science and engineering at the School of Chemical Sciences and director of the Centre for Nanoscience and Nanotechnology at Mahatma Gandhi University, Kottayam, Kerala, India. He received his BSc (1980) in chemistry from the University of Kerala, Tech. (1983) in polymer science and rubber technology from the Cochin University of Science and Technology, and PhD (1987) in polymer engineering from the Indian Institute of Technology, Kharagpur. The research activities of Professor Thomas include surfaces and interfaces in multiphase polymer blend and composite systems; phase separation in polymer blends; compatibilization of immiscible polymer blends; thermoplastic elastomers; phase transitions in polymers; nanostructured polymer blends; macro-, micro- and nanocomposites; polymer rheology; recycling; reactive extrusion; processing–morphology–property relationships in multiphase polymer systems; double networking of elastomers; natural fibers and green composites; rubber vulcanization; interpenetrating polymer networks; diffusion and transport; and polymer scaffolds for tissue engineering. He has supervised 64 PhD theses, 30 MPhi. theses, and 40 masters theses. He has three patents to his credit. He also received the coveted Sukumar Maithy Award for the best polymer researcher in the country for the year 2008. Very recently Professor Thomas received the MRSI and CRSI medals for his excellent work. With over 600 publications to his credit and over 15,000 citations, with an h-index of 65, Dr. Thomas has been ranked fifth in India as one of the most productive scientists.

Sajid Alavi, PhD, is a professor of extrusion processing and food engineering in the Department of Grain Science and Industry at Kansas State University, Manhattan, Kansas, USA. He received his BS degree (1995) in agricultural engineering from Indian Institute of Technology (Kharagpur), MS (1997) in agricultural and biological engineering from the Pennsylvania State University, and PhD (2002) in food science/food engineering from Cornell University, Ithaca, New York. Dr. Alavi's research activities are focused in the areas of food engineering, extrusion processing for industrial and food applications, nanocomposites for packaging applications, mathematical modeling of flow and structure formation in biopolymer melts during extrusion, food microstructure imaging, structure-texture relationships, and new approaches to global food security and nutrition through processing. He has secured over $6.3 million in extramural funding from various federal, state, and industrial sponsors for his research program. He has supervised seven PhD and 13 masters-level students. Dr. Alavi’s received the coveted 2010 Young Research Scientist Award from AACC International, formerly the American Association of Cereal Chemists, which is an important recognition for research accomplishments. Dr. Alavi designs technology and R&D solutions for numerous food, feed, and pet food processors, and is involved in processing and food-aid-related projects in USA, Africa, India, and other countries around the world. He has been invited to speak at numerous international forums and institutions in USA, Italy, South Africa, Brazil, India, Mozambique, and China. He has provided training and networking opportunities to 800 industry leaders from 30 countries spanning all six continents through his internationally reputed short course "Extrusion Processing: Technology and Commercialization" and similar offerings and workshops in other countries such as India and Mozambique.

K. P. Sandeep, PhD, is a professor of food engineering, research leader and associate head in the Department of Food, Bioprocessing and Nutrition Sciences as well as an associate faculty member in the Department of Biological and Agricultural Engineering at North Carolina State University, Raleigh, North Carolina, USA. He is also site director of the Center for Advanced Processing and Packaging Studies. He received his BS (1991) in agricultural engineering from the Indian Institute of Technology (Kharagpur), his MS (1993), and his PhD (1996) in agricultural and biological engineering from the Pennsylvania State University. His research areas include nanotechnology, thermal and aseptic processing, continuous flow microwave processing, heat exchanger design, development of sensors, mathematical modeling of fluid flow and heat transfer, microelectromechanical systems (MEMS), and nuclear magnetic resonance (NMR). Dr. Sandeep has co-authored scores of books, peer-reviewed publications, and technical abstracts, posters, and presentations on aseptic processing and related topics. He has served as a consultant to several companies and serves as a member of the advisory board to the Southeast Dairy Foods Research Center. He also conducts short courses tailored to meet the specific needs of industry on topics such as nanotechnology, thermal processing, and NMR.

Dr. Nandakumar Kalarikkal is a professor of physics at the School of Pure and Applied Physics and joint director of Centre for Nanoscience and Nanotechnology at Mahatma Gandhi University, Kottayam, Kerala, India. He received his BSc (1984) in physics from Calicut University, and MSc (1986) and PhD (1992) in physics from Cochin University of Science and Technology, Kerala, India. His research activities involve nanotechnology and nanomaterials, sol-gel synthesis of nanosystems, semiconducting glasses, ferroelectric ceramics, and nonlinear and electro-optic materials. He is the recipient of research fellowships and associateships from prestigious organizations such as the Department of Science and Technology and Council of Scientific and Industrial Research of the Government of India. He has collaborated with national and international scientific institutions in India, South Africa, Slovenia, Canada, and Australia, and is co-author of several books, chapters, peer-reviewed publications, and invited presentations in international forums.

Ms. Jini Varghese is a research scholar at the School of Chemical Sciences at Mahatma Gandhi University, Kottayam, Kerala, India. She is engaged in doctoral studies in the area of EPDM rubber-graphene nanocomposites. She received her MSc in analytical chemistry from Mahatma Gandhi University. Ms. Varghese is a recipient of the Women Scientist Award from the Department of Science and Technology of the Government of India.

Mr. Srinivasarao Yaragalla is a research scholar at the Centre for Nanoscience and Nanotechnology at Mahatma Gandhi University, Kottayam, Kerala, India. He is engaged in doctoral studies in the area of graphene-based polymer nanocomposites. He has also conducted research work at the Universiti Teknologi MARA in Malaysia. In 2010, Mr. Yaragalla received a prestigious research fellowship administered jointly by the Council of Scientific and Industrial Research and University Grants Commission of the Government of India. 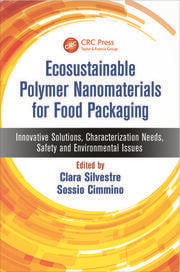 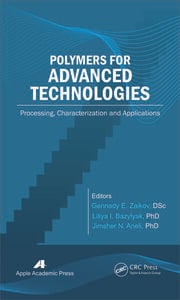 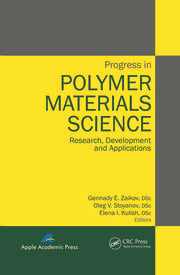