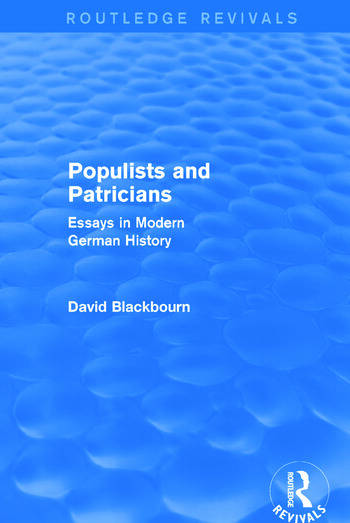 First published in 1987, this collection of essays, from one of the leading historians in the field, is concerned with the central debates about German history from Bismarck to Hitler. David Blackbourn questions many previously held assumptions, whether about the natural conservatism of the German peasantry of the ‘feudalization’ of the middle classes, and offers a new angle of approach to such subjects as liberalism, anti-semitism and the continuing importance of religion in German history. Bringing together social, economic, cultural and political history, each essay is concerned with the social and political flux that characterized the period, and with the problems and opportunities it presented. This reissue will be of great value to any students and academics with an interest in the history of modern Germany.

Acknowledgements;  Introduction;  Part I: ‘Great Men’?  1. Bismarck: the Sorcerer’s Apprentice  2. The Kaiser and his Entourage  3. The Big Show: Syerbeg’s Hitler;  Part II: Awkward Classes  4. The Discreet Charm of the German Bourgeoisie  5. Between Resignation and Volatility: the German Petty Bourgeoisie in the Nineteenth-Century  6. Peasants and Politics in Germany, 1871-1914;  Part III: Catholics and Politics  7. Progress and Piety: Liberals, Catholics and the State in Bismarck’s Germany  8. Catholics, the Centre Party and Anti-Semitism  9. Catholics and Politics in Imperial Germany: the Centre Party and its Constituency;  Part IV: Populists and Patricians  10. The Politics of Demagogy in Imperial Germany  11. Politics as Theatre: Metaphors of the Stage in German History, 1848-1933;  Index