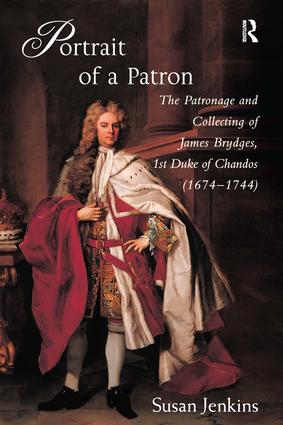 Portrait of a Patron

Once described as 'England's Apollo' James Brydges, first Duke of Chandos (1674-1744) was an outstanding patron of the arts during the first half of the eighteenth century. Having acquired great wealth and influence as Paymaster-General of Queen Anne's forces abroad, Chandos commissioned work from leading artists, architects, poets and composers including Godfrey Kneller, William Talman, Sir John Vanbrugh, Sir James Thornhill, John Gay and George Frederick Handel. Despite his associations with such renowned figures, Chandos soon gained a reputation for tasteless extravagance. This reputation was not helped by the publication in 1731 of Alexander Pope's poem 'Of Taste' which was widely regarded as a satire upon Chandos and Cannons, the new house he was building near Edgware. The poem destroyed Chandos's reputation as a patron of the arts and ensured that he was remembered as a man lacking in taste. Yet, as this book shows, such a judgement is plainly unfair when the Duke's patronage is considered in more depth and understood within the artistic context of his age. By investigating the patronage and collections of the Duke, through an examination of documentary sources and contemporary accounts, it is possible to paint a very different picture of the man. Rather than the epitome of bad taste described by his enemies, it is clear that Chandos was an enlightened patron who embraced new ideas, and strove to establish a taste for the Palladian in England, which was to define the Georgian era.

'The marvels of Chandos's lost palace and scattered collections live again in this book. A fascinating portrait of an extravagant, contradictory figure and his times.' Simon Bradley, Editor, Pevsner Architectural Guides 'Susan Jenkins's brilliant and scholarly account of this parvenu prince of patrons sheds new light on almost every aspect of the extraordinarily rich culture of Augustan England.' Desmond Shawe-Taylor, Surveyor of the Queen's Pictures ’This is a book for those who are interested in the phenomenon of collecting, whether enthusiast or student. It is full of detailed information and extensive footnotes and appendices, with a select bibliography and an index. Jenkins has not only presented the facts but sifts and judges in a very readable way. The background information is a fascinating as the main story.’ The Art Book ’With use of an extensive range of unpublished sources, this wide-ranging work re-establishes the merit and importance of a great patron… it is greatly to be welcomed as a major work of scholarship on a little-studied topic of considerable significance in the history of British taste.’ Journal of the History of Collections

Contents: Introduction; Curriculum vitae: ambitions, achievements, politics; Architectural patronage: the building of Cannons; Cannons: the interior decoration; The grounds of Cannons; After the crash: architectural and other projects; Collecting in context: collectors and collections; The Duke of Chandos as a collector; The Duke as 'Apollo of the Arts'; Death and disposal; Appendices; Select bibliography; Index.

Dr Susan Jenkins was awarded a history scholarship to Gonville & Caius College, Cambridge, followed by an MA in Art History with Distinction, from the Courtauld Institute, London. She has worked as a curator at the V&A, Historic Royal Palaces and the J. Paul Getty Museum and has published on the history of taste and collecting.