Post-Truth, Fake News and Democracy
Mapping the Politics of Falsehood 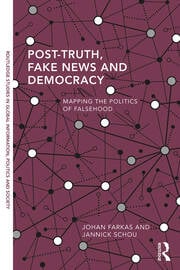 Post-Truth, Fake News and Democracy: Mapping the Politics of Falsehood

Western societies are under siege, as fake news, post-truth and alternative facts are undermining the very core of democracy. This dystopian narrative is currently circulated by intellectuals, journalists and policy makers worldwide. In this book, Johan Farkas and Jannick Schou deliver a comprehensive study of post-truth discourses. They critically map the normative ideas contained in these and present a forceful call for deepening democracy.

The dominant narrative of our time is that democracy is in a state of emergency caused by social media, changes to journalism and misinformed masses. This crisis needs to be resolved by reinstating truth at the heart of democracy, even if this means curtailing civic participation and popular sovereignty. Engaging with critical political philosophy, Farkas and Schou argue that these solutions neglect the fact that democracy has never been about truth alone: it is equally about the voice of the democratic people.

delivers a sobering diagnosis of our times. It maps contemporary discourses on truth and democracy, foregrounds their normative foundations and connects these to historical changes within liberal democracies. The book will be of interest to students and scholars studying the current state and future of democracy, as well as to a politically informed readership.

4. US Politics in Post-Truth Worlds

Part 2: Out of Post-Truth Worlds

6. Post-Truth and Post-Politics: Splitting the Difference

8. Conclusion: Looking to the Future

Johan Farkas is a PhD Fellow in Media and Communication Studies at Malmö University, Sweden. Farkas has published in international journals such as New Media & Society, Critical Discourse Studies and the Brown Journal of World Affairs. Overall, his research interests lie at the intersection of digital media platforms, politics, civic engagement, journalism, and democracy. Since 2018, Farkas has been the Chair of the Young Scholars Network of the European Communication Research and Education Association (YECREA).

(PhD) researches questions of politics, citizenship and democracy, particularly in relation to digital technology and European welfare states. He is the author of several monographs and more than a dozen publications in renowned international journals. In 2018, he was awarded the Swedish Political Science Association’s (SWEPSA) prize for best young researcher.

"Post-truth, Fake News and Democracy provides a highly original analysis of how discourses of truth have emerged in the "fake news" era. It shows how (re)equating democratic governance with only reason, rationality and truth undermines the voice of the people and excludes those most disaffected with politics. Anyone interested in contemporary debates on power and democracy will be both challenged and captivated by this book."—Ariadne Vromen, Professor of Political Sociology, Department of Government and International Relations, University of Sydney

"Drawing on groundbreaking empirical and theoretical work, Farkas and Schou demonstrate the double threat to democracy posed by post-truth propaganda and its obverse: an authoritarian backlash to the politics of Truth with a capital T. Post-Truth, Fake News and Democracy provides an invaluable conceptual roadmap for navigating the political perils of the contemporary media landscape with an unwavering commitment to democratic politics. The authors provide more than compelling arguments and timely analysis they offer a powerful and carefully constructed resource for hope."—Mark Andrejevic, Professor at the School of Media, Film, and Journalism, Monash University

"The book I have been waiting for - a critical interrogation of post-truth and fake news discourses embedded in their political and historical context that puts democratic renewal center stage. Farkas and Schou skilfully draw upon political philosophy to argue that it is democracy rather than truth claims that should take priority if we really want deeper, better and more inclusive democratic institutions and societies. As they put it ,"we don't need more truth but more politics". This book is not only conceptually compelling but also politically important. It helped me understand not only what is going on but also what to do about it. A book for our times. Read it."—Natalie Fenton, Professor of Media and Communications, Co-Director Centre for the Study of Global Media and Democracy, Goldsmiths, University of London

"This is a book that needed to be written. Through an impressive empirical mapping and discourse theoretical analysis of recent post-truth and fake news discourses, the authors identify, and problematize, how democracy in these discourses is articulated as a technocratic order based on "the rule by truth." In the process, and with the help of historical contextualization, Farkas and Schou expose the reactionary anti-democratic imaginary within the discourses, and consequently open space to once more envision democracy in terms of "the rule by the people." This incredibly insightful and important book is a must read for all students, scholars, and proponents of democracy."—Lincoln Dahlberg, Researcher in Media Politics and Digital Democracy

"Few deny the emergence and importance of post-truth politics, fake news, and the changing impact of the public and social media on democratic politics, though it is difficult to find compelling diagnoses and alternatives. In Post-Truth, Fake News and Democracy, Johan Farkas and Jannick Schou provide a compelling diagnosis of the contemporary discourses on "post-truth" through an in-depth analysis of news articles, commentaries, academic publications, policy briefs and political speeches. Carefully linking empirical research and critical political philosophy, the book successfully challenges those who call simply for greater truth and rationality by outlining a deeper conception of democracy, and its attendant institutions and practices. This is an important and path-breaking contribution that responds to a pressing issue in contemporary society and politics."—David Howarth, Professor and Director of the Centre for Ideology and Discourse Analysis, University of Essex, UK