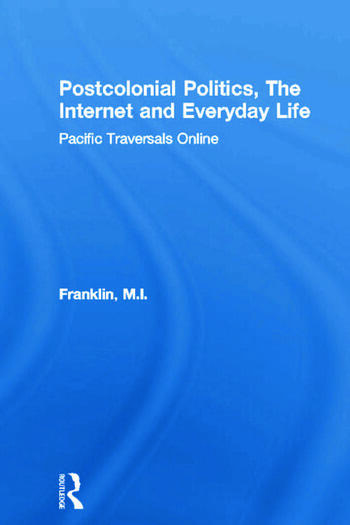 In this ground-breaking study M.I. Franklin explores the form and substance of everyday life online from a critical postcolonial perspective. With Internet access and social media uses accelerating in the Global South, in-depth studies of just how non-western communities, at home and living abroad, actually use the Internet and web-based media are still relatively few. This book’s pioneering use of virtual ethnography and mixed method research in this study of a longstanding ‘media diaspora’ incorporates online participant-observation with offline fieldwork to explore how postcolonial diasporas from the south Pacific have been using the Internet since the early ways of the web. Through a critical reconsideration of the work of Michel de Certeau in light of postcolonial and feminist theories, the book provides insights into the practice of everyday life in a global and digital age by non-western participants online and offline.

Critical of techno- and media-centric analyses of cyberspatial practices and power hierarchies, Franklin argues that a closer look at the content and communicative styles of these contemporary Pacific traversals suggest other Internet futures. These are visions of social media that can be more hospitable, culturally inclusive and economically equitable than those promulgated by both powerful commercial interests and state actors looking to take charge of the Internet ‘after Web 2.0’.

The book will be of interest to students of international politics, media and communications, cultural studies, science and technology studies, anthropology and sociology interested in how successive waves of new media interact with shifting power relations at the intersection of politics, culture, and society.

First published in hardback in 2005.

5: "A play on the royal demons": Tongan political dissent online

6: "I define my own identity": rearticulating "race", "ethnicity" and "culture"

9: Knowledge, power and the Internet

M. I. Franklin is Reader and Director of the Global Media & Transnational Communications program at Goldsmiths (University of London, UK). Other books include Resounding International Relations: On Music, Culture and Politics (Palgrave MacMillan), Understanding Research: Coping with the Quantitative-Qualitative Divide (Routledge), and Digital Dilemmas: Power, Resistance and the Internet (Oxford University Press, 2013).

'In this fascinating and important book, M.I. Franklin reveals that they are already present. Reflecting on her own contribution, Franklin expresses the hope to have made the initial opening in terms of other ways in which ICTs can be thought about, designed, and eventually used, by examining the practice of everyday life online (p. 232). She has succeeded in doing this and more. - J. Marshall Beier, McMaster University, Canada

'If culture means the ways people make sense of their place and time in the world, and if anthropology's distinctive contribution the study of such ways has been based on ethnography - meeting culture-makers on their own ground and terms - then this book must count as a pioneering work. It transports research to a field whose reality is in no way denied by calling it virtual. It is an inspiring example to follow, all the more remarkable because the author is "technically" not an anthropologist.'

'While other ethnographic studies of the internet are sensitive to global concerns, Franklin’s strength is that she brings together a politically-informed analysis of the ways in which the internet is implicated in globalisation with a very subtle, nuanced exploration of the everyday practices of internet use by an economically marginal group of people, namely Pacific Islanders.'

'No neat conclusions here, and nor should there be, but plenty of food for thought and, with a generous sprinkling of direct quotes - hilarious, furious, honest, wise, confronting and always insightful - a thoroughly enjoyable read.'

'Postcolonial Politics, The Internet, and Everyday Life represents scholarship of the future. That is, it takes seriously how a group of people usually not heard from in mainstream academia (the South Pacific diaspora) utilizes a contemporary means of communication (the Internet) to articulate and formulate a subject rarely discussed in liberal democratic theory (collective identity in a globalized, postsovereign world).'

'Through this methodologically unique exploration of translocal negotiations of identity and political agency, Franklin offers us new meanings of self and community in resistance to technostrategic trajectories and erasures. Likening this 'other' internet to the 'oceans within' Pacific Islander consciousness, she takes us to new "shorelines" of feminist postcolonial inquiry.'