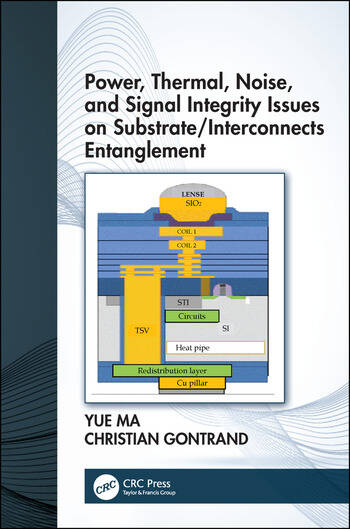 As demand for on-chip functionalities and requirements for low power operation continue to increase as a result of the emergence in mobile, wearable and internet-of-things (IoT) products, 3D/2.5D have been identified as an inevitable path moving forward. As circuits become more and more complex, especially three-dimensional ones, new insights have to be developed in many domains, including electrical, thermal, noise, interconnects, and parasites. It is the entanglement of such domains that begins the very key challenge as we enter in 3D nano-electronics. This book aims to develop this new paradigm, going to a synthesis beginning between many technical aspects.

MA Yue has got engineer’s and master’s degrees in electrical and computer engineering from the Ecole Centrale de Pékin and Beihang university, respectively His PhD, obtained at the Institute des Nanotechnologies de Lyon (INL) in the university of Lyon, INSA, France, concerns the field of micro-electronics: First and second order electro-thermal parameters for3D circuits .His scientific interests include mathematics modeling, integrated circuits and systems, and computer-aided IC design, with theatrical and practical issues in numerical simulation methods, applied especially to 3D ICs. He..

Christian GONTRAND was born in Montpellier, France, on February 21, 1955.

From 1982 to 1984, He has been working with the Thomson "Laboratoire Central de Recherche"(LCR), Orsay, where his areas of interest included theoretical (electrical transport) and experimental (noise) of microwave devices (TEGFETs/HEMTs).

From 1988, he joined the laboratoire de Physique de la Matière (LPM/INSA), Villeurbanne, as a Research Assistant Professor. From 1988 to 1996, He had the technical charge of the new "Centre de Microélectronique de la Région Lyonnaise" (CIMIRLY), and worked on new RF compatible silicon devices, in collaboration with the Centre National des Etudes en Telecommunication (CNET), Meylan,France.

From 1997 to 2001, as a Professor in semiconductor devices and circuits, he was at the head of the team "Smart System Integration", at the "Centre de Génie Electrique de Lyon" (CEGELY/AMPERE). From 2002, he was at the Head of the axis "Radiofrequency Devices, Circuits and Systems" of DE team of the Lyon Institute of Nanotechnology, dealing with noises or parasitic disturbances in mixed complex 2D and 3D RF circuits and systems.