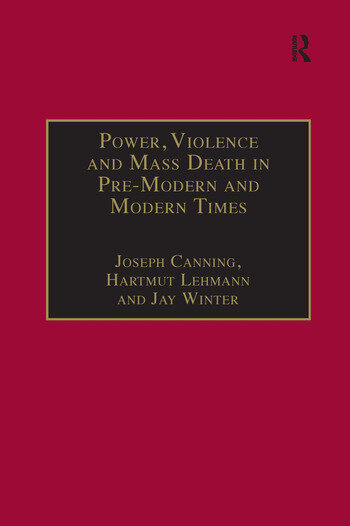 Contents: Introduction: The 14th, the 17th and the 20th centuries as centuries of violence and mass death, Hartmut Lehmann; Part I Fourteenth Century: The crisis of the 14th century, Joseph Canning; Famine and popular resistance: Northern Europe, 1315-22, William Chester Jordan; The Black Death: the end of a paradigm, Samuel K. Cohn, Jr.; War in 14th-century Europe, A.D. Carr. Part II Seventeenth Century: Under the spell of Mars: Power, violence, and mass death in 17th-century Europe, Hartmut Lehmann; The experience of violence during the Thirty Years War: a look at the civilian victims, Otto Ulbricht; The atrocities of war in early modern art, Bernd Roeck; The experience of violence and the expectation of the end of the world in 17th-century Europe, Markus Meumann; Part III Twentieth Century: Representations of war in the East, 1941-45: the German case, Tobias Jersak; Representations of war in Western Europe, 1939-45, Pieter Lagrou; Representations of war on the Eastern Front, 1914-18, Vejas Gabriel Liulevicius; Representations of war on the Western Front, 1914-18: some reflections on cultural ambivalence, Jay Winter; Index.

'... the volume succeeds through its juxtaposition of different appraches to similar questions across a broad sweep of European history.' History