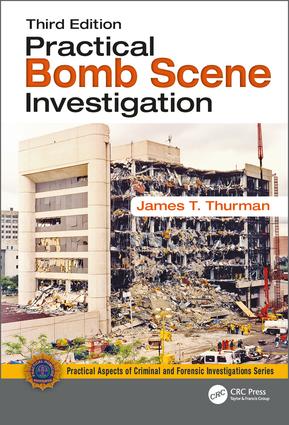 Now in its Third Edition, Practical Bomb Scene Investigation explores the investigative process that improvised explosive device (IED) specialists undertake at the scene of an explosion. Providing easy-to-understand, step-by-step procedures for managing and processing a bomb scene, it enables investigators to find the evidence and then make sense of what is found. The book is not only a roadmap on how to find and collect evidence and assess the scene, but also provides instruction on identifying the bombmaker's signature through latent print, DNA, explosive residue, metallurgical, and toolmark examination and forensic analysis.

"Practical Bomb Scene Investigation has become a standard in the field for a reason. James T. Thurman writes from the unique perspective of a practitioner who has worked some of the highest profile bombing cases in US history. He brings a unique voice which blends technical explanations applied through a pragmatic perspective. This text is a valuable reference for academics and responders alike." – Dr. Kirk Yeager

"Professor Thurman’s book is an essential guide for explosion investigators. It is comprehensive, detailed and a fabulous reference guide. No explosion scene investigator should be without it." – Richard Hahn, FBI Retired, Crime Scene Manager at Oklahoma City Bombing

"Practical Bomb Scene Investigation, Second Edition is currently required reading for the IABTI Certified International Post Blast Investigators (CIPBI) Certification Program. This third edition will be a welcome addition. I am impressed with the attention to detail and increased references and this text is a must for bomb technicians and investigators. I highly recommend this book for anyone who is looking to expand their knowledge in the explosive field and post blast investigations." – Jake Bohi CIPBI, Phoenix Police Department Bomb Squad (Retired), International Association of Bomb Technicians and Investigators Assistant International Director, Professional Certification Program Chairman

Chapter One: Explosion Theory and Dynamics

Chapter Four: Investigation of the Explosion Scene and Collection of Evidence

Chapter Six: Introduction to the Identification of Military Ordnance

Appendix A: Chart of Explosive Products

Appendix B: United States and Foreign Names of Explosives, Part I and Part II

Appendix D: Guidelines for the Prevention of Contamination of Explosives Evidence

Appendix F: Supplies and Equipment for the Bomb Scene Investigation

has worked in the explosives field for more than 30 years, first as a U.S. Army bomb disposal technician and then as a special agent with the FBI. He continues to lecture and provide training on the methods of bomb scene investigation and explosives avoidance to domestic and international training schools and audiences. He is currently a professor at the Eastern Kentucky University, teaching a unique academic program on fire, arson, and explosion investigation. He holds a BA from Eastern Kentucky University and an MS Degree in Forensic Science from the George Washington University.