Practices of Resistance in the Caribbean
Narratives, Aesthetics and Politics 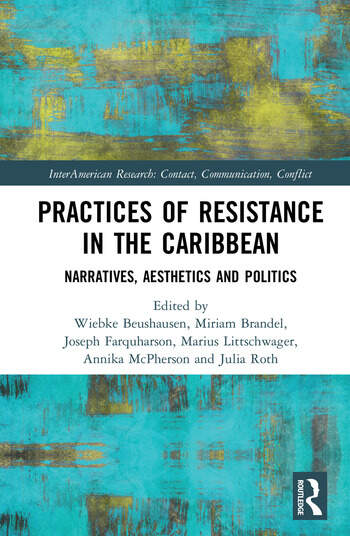 Practices of Resistance in the Caribbean: Narratives, Aesthetics and Politics

The Caribbean has played a crucial geopolitical role in the Western pursuit of economic dominance, yet Eurocentric research usually treats the Caribbean as a peripheral region, consequently labelling the inhabitants as beings without agency.

Examining asymmetrical relations of power in the Greater Caribbean in historical and contemporary perspectives, this volume explores the region’s history of resistance and subversion of oppressive structures against the backdrop of the Caribbean’s central role for the accumulation of wealth of European and North American actors and the respective dialectics of modernity/coloniality, through a variety of experiences inducing migration, transnational exchange and transculturation. Contributors approach the Caribbean as an empowered space of opposition and agency and focus on perspectives of the region as a place of entanglements with a long history of political and cultural practices of resistance to colonization, inequality, heteronomy, purity, invisibilization, and exploitation.

An important contribution to the literature on agency and resistance in the Caribbean, this volume offers a new perspective on the region as a geopolitically, economically and culturally crucial space, and it will interest researchers in the fields of Caribbean politics, literature and heritage, colonialism, entangled histories, global studies perspectives, ethnicity, gender, and migration.

Narratives, Politics, and Aesthetics of Resistance across the Caribbean and Its Diasporas

: From Theory to Practice and Back

: Resistance Performances in the (Re)Construction of Spaces of Resistance and Contention during the First Wave of the 2010-2011 University of Puerto Rico Student Movement

Wiebke Beushausen is a researcher and doctoral candidate associated with the Transcultural Studies research group at the University of Heidelberg and a lecturer in International Cultural Studies at the University of Mannheim, Germany. She has finished her PhD thesis on body and gender politics and coming of age in contemporary women’s writing of the Caribbean diaspora. Her research interests include Caribbean literatures, feminisms and body studies, diaspora studies, and decolonial and postcolonial approaches.

is a lecturer and doctoral candidate at the chair of North American Literary and Cultural Studies at Bielefeld University. Her research and teaching is located in the fields of Inter-American, North American, and Postcolonial Studies. Her research interests include Caribbean diasporic Anglophone literatures and sociocultural approaches to international migration processes and multiculturalism. She has published on the concept of home and translocational identity in film and literature.

Joseph T. Farquharson holds a PhD in Linguistics from the University of the West Indies, Mona, where he is currently a lecturer in the Department of Language, Linguistics and Philosophy. During the period 2013-2016 he held a postdoctoral fellowship at the Center for InterAmerican Studies, Bielefeld University. His current research focuses on language, migration and identity, and he has published on language variation, the morphology of contact languages, linguistic ideology, language and music, and slang.

holds a PhD in Interamerican Studies and is postdoctoral research assistant in Romance Studies and Comparative Literature at the University of Bielefeld, Germany. His publications include articles and essays on Edgar Allan Poe, Roberto Bolaño, Chilean exile literatures, recent Mexican fiction, and Caribbean cultures. Also operating as editor for the online journal fiar (Forum for Interamerican Research), he is responsible for Spanish speaking sections and contributions. His main fields of research are 20th- and 21st-century Latin American fiction, Postcolonial Studies, Cultural Translations, and Visual Cultures of the Americas.

is Juniorprofessor for New English Literatures and Cultural Studies at the University of Augsburg, Germany, president of the Association for Anglophone Postcolonial Studies (GAPS), and an associate of the interdisciplinary Wits Centre for Diversity Studies, University of the Witwatersrand, Johannesburg, South Africa. Her research and teaching areas include postcolonial studies; theories, policies, and literary representations of cultural diversity in comparative perspective; Caribbean, West African, South African, and Indian literatures in English; diaspora studies; as well as speculative fiction and Afrofuturism. Her current project focuses on notions of enslavement and freedom in Anglophone fiction, poetry, film, and music.

is postdoctoral researcher and lecturer at the research network "The Americas as Space of Entanglements" at the Center for InterAmerican Studies and the department for North American Literary and Cultural Studies at Bielefeld University in Germany. Her research interests include postcolonial and gender approaches, critical race studies, intersectionality and global inequalities. Her current projects focus on gender and citizenship, Caribbean anti-racist feminisms, intersectionality, and hip hop and feminist knowledge production. Alongside her academic work, she organizes cultural-political events.