Precariousness and the Performances of Welfare 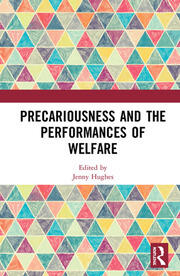 Precariousness and the Performances of Welfare


Precariousness and the Performances of Welfare

brings together an international group of artists, activists and scholars to explore precarity in the contexts of applied and socially engaged theatre. The policy of austerity pursued by governments across the global North following the financial crisis of 2008 has renewed interest in issues of poverty, economic inequality and social justice. Emerging from European contexts of activism and scholarship, ‘precarity’ has become a shorthand term for the permanently insecure conditions of life under neoliberal capitalism and its associated stripping back of social welfare protections. This collection explores a range of theatre practice, including activist theatres, theatre and health projects, the community work of regional theatres, arts-led social care initiatives, people’s theatres and youth arts programmes. Comprising full-length chapters and shorter pieces, the collection offers new perspectives on social theatre projects as creative occasions of occupation that generate a sense of security in a precarious world.

This book was originally published as a special issue of RiDE: The Journal of Applied Theatre and Performance.

Introduction - Theatre and the social factory  1. Performing to understand: cultural wealth, precarity, and shelter-dwelling youth  2. ‘Think differently, get creative’: producing precarity in India’s corporate theater culture industry  3. Birmingham Rep, youth and community, and the products and possibilities of precarity  4. Subverting ableist discourses as an exercise in precarity: a Zimbabwean case study  5. Hard labour and punitive welfare: the unemployed body at work in participatory performance  6. Notes on a theatre commons: Common Wealth’s The Deal Versus the People (2015)  7. Finding a concrete utopia in the dystopia of a ‘sub-city’  8. Rethinking fragile landscapes during the Greek crisis: precarious aesthetics and methodologies in Athenian dance performances  9. Relocating precarity and resiliency within Montreal: the Artists’ Bloc of the Immigrant Workers’ Centre  10. Teatro Valle Occupato: protesting, occupying and making art in contemporary Italy  11. Compassion is dissent  12. In the Limelight: enthusiasm, commitment and need  13. The resilience web  14. Precariousness and groundedness in arts in mental health  15. ‘Days in the Bay’: a short performance devised by the Tiger’s Bay Men’s Group and inspired by the changing streetscape of North Belfast  16. On ‘A Piece for Two (Lovers)’ – an unrehearsed performance piece  17. A people’s theatre for Brighton – an interview with Naomi Alexander

is a Senior Lecturer in Drama at the University of Manchester, UK. She is Points and Practices editor of RiDE: The Journal of Applied Theatre and Performance and publishes in the areas of theatre and economic justice; performance and war; activist performance; and aspects of applied theatre, especially theatre with young people living with risk and the histories of socially engaged theatre. Her recent publications include Critical Perspectives on Applied Theatre (with Helen Nicholson, 2016) and a special issue of Contemporary Theatre Review edited with Simon Parry, ‘Theatre, Performance and Activism’ (2015).