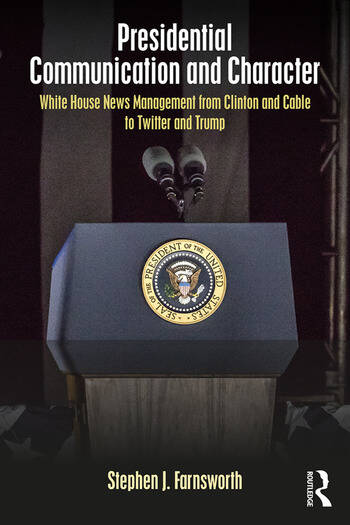 Presidential Communication and Character: White House News Management from Clinton and Cable to Twitter and Trump

This book traces the evolution of White House news management during America’s changing media environment over the past two decades. Comparing and contrasting the communication strategies of Bill Clinton, George W. Bush, Barack Obama, and Donald Trump, it demonstrates the difficulty that all presidents have in controlling their messages despite a seemingly endless array of new media outlets and the great advantages of the office. That difficulty is compounded by new media’s amplification of presidential character traits for good or ill. Facebook, Twitter, and YouTube notwithstanding, presidential power still resides in the "power to persuade," and that task remains a steep challenge. More than ever, presidential character matters, and the media presidents now employ report on the messenger as much as the message.

The book also looks at the media strategies of candidates during the 2016 presidential campaign, puts presidential media use in global context, and covers the early phase of the Trump administration, the first true Twitter presidency.

Stephen J. Farnsworth is Professor of Political Science and International Affairs, and Director of the Center for Leadership and Media Studies, at the University of Mary Washington. He is the author or coauthor of six books on the presidency and the mass media, and is a 2017 recipient of the State Council of Higher Education for Virginia’s Outstanding Faculty Award.

Praise for Presidential Communication and Character

The last four occupants of the Oval Office could hardly be more different, so it should be no surprise that each has used his own preferred medium and method of reaching the public effectively. In this engaging book that will appeal especially to students, Stephen Farnsworth compares and contrasts Bill Clinton with cable TV news, George W. Bush with FOX News Channel, Barack Obama with social media, and Donald Trump with Twitter. This is a very useful addition to courses on the media, public opinion, and the presidency.

, University of Virginia; Director of the Center for Politics

Stephen Farnsworth’s informative account of evolving modern presidential communication strategies provides what political scientists and citizens so desperately need: historical perspective on Donald Trump’s "Twitter presidency." By carefully comparing Trump’s media strategies with those of Obama, Bush, and Clinton, Farnsworth enables us to better assess what is distinctive about the Trump presidency and to answer the all-important question of whether Trump is one of a kind or a portent of the nation’s future.

, Willamette University; Author of The Development of the American Presidency

Presidential Communication and Character discusses the last 25 years of presidential communication strategy, showing how difficult it is for the White House to manage the news and persuade the public.

Stephen Farnsworth’s latest investigation of presidential communication deftly explores how modern presidents highlight their personal character when navigating a dynamic and perilous media terrain. Updating Richard Neustadt’s notion of the presidential "power to persuade," this important work includes masterful studies of Presidents Clinton, Bush, Obama, and Trump that offer a comprehensive evaluation of presidential communication during a period of constant change in the media environment the governing playbook.

This thoughtful review of the last 25 years of presidential communication tells a story not just about different approaches to campaigning, but about the constantly shifting media environment through which presidents and publics interact. Farnsworth highlights the extent to which presidents’ strategy, style, and character has shifted alongside changes in communication technology. A careful analysis of this dynamic is long overdue and now comes at an ideal time, amid striking changes in presidential communication.

Farnsworth has given us a highly engaging and carefully researched account of how presidents over the past 25 years have sought to blend personality, communication, policy, and media to lead, uncovering sweeping developments without sacrificing attention to detail.

Anyone looking to pepper their lectures on political communication, the presidency, and the media with updated examples will find this a very useful read. So, too,will those struggling with how to objectively place President Trump’s unorthodox communication and news management style in context.