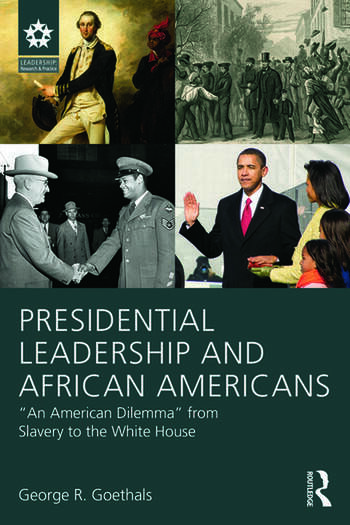 Presidential Leadership and African Americans: "An American Dilemma" from Slavery to the White House

Presidential Leadership and African Americans examines the leadership styles of eight American presidents and shows how the decisions made by each affected the lives and opportunities of the nation’s black citizens. Beginning with George Washington and concluding with the landmark election of Barack Obama, Goethals traces the evolving attitudes and morality that influenced the actions of each president on matters of race, and shows how their personal backgrounds as well as their individual historical, economic, and cultural contexts combined to shape their values, judgments, and decisions, and ultimately their leadership, regarding African Americans.

"In this highly original and timely inquiry, eminent social psychologist and leadership scholar George Goethals traces the formative role that presidential judgment and initiative have played in the progress of African Americans in this country -- from the beginnings of slavery to the election of its first African American president. The points are incisively argued and the narrative masterfully wrought. This is a major achievement and one that sets the bar for future scholarship in this important and neglected area." - Roderick M. Kramer, William R. Kimball Professor of Organizational Behavior, Stanford University Graduate School of Business, USA

"Professor Goethals’ brilliant and pioneering book is a penetrating examination of the leadership, values, and policy decisions of eight American presidents in relation to the plight as well as the progress of African Americans in the United States. Deeply engaging, brimming with original insights, I could hardly put it down." - Susan Dunn, author of 1940: FDR, Willkie, Lindbergh, Hitler -- the Election Amid the Storm, Williams College, USA

"Provocative and compelling.When it came to issues of racial equality, many of our illustrious presidents, including Jefferson, Teddy Roosevelt and Woodrow Wilson, Psychologist Al Goethals tellingly concludes, were conflicted followers of the status quo rather than leaders." - Tom Cronin, Colorado College, USA

"Leadership is difficult to define, but we know it when we see it.  Goethals sees it in several prominent American presidents who helped move history forward on the issue of racial equality and does not see it in several presidents who failed the racial test.  Many readers will be surprised at the names on the second list." - Joseph J. Ellis, Author of Founding Brothers, Williams College, USA