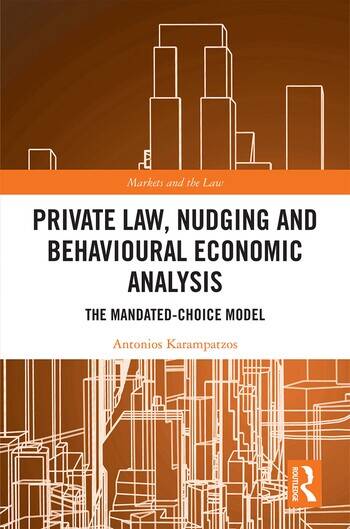 It suggests that the dilemma between inefficient opt-in rules and autonomy restricting opt-out schemes fails to realistically capture the span of options available to the policy maker. There is a third path, namely the ‘mandated-choice model’. The book is mainly dedicated to presenting this model and exploring its great potential. Contract law, consumer protection, products safety and regulatory problems such as organ donation or excessive borrowing are the setting for the discussion. Familiarising the reader with a hot debate on paternalism, behavioural economics and private law, this book takes a further step and links this behavioural law and economics discussion with philosophical considerations to shed a light on modern challenges, such as organ donation or consumers protection, by adopting an openly interdisciplinary approach.

The book will be of interest to students and scholars of contract law, legal systems, behavioural law and economics, and consumer law.

II Do all individuals act irrationally?

III Are all behavioral biases bad?

2 Sunstein and Thaler’s nudge theory, the steering of people’s behavior by means of default or opt-out rules, and the promotion of a ‘mild’ or ‘libertarian’ paternalism

II The pervasiveness of loss aversion and the endowment effect

1 The deficiencies of centralized regulation

a Main points of the objection

bb Personal autonomy in need of a rethink?

3 Beyond defaults, opt-out or opt-in systems: the recourse to the visible hand of the mandated-choice model

1 The withdrawal right justified by virtue of BEAL

2 The rationale behind the withdrawal right in distance contracts

3 A third way: the mandated-choice model as a means of reinforcing private autonomy and efficiently protecting consumers

c Insurance premium and the issue of cross-subsidization

d Insurance premium and the issue of opportunistic consumer behavior

e Juxtaposition with a scheme of personalized mandatory rules

II The barrier of EU law on consumer protection

6 Strict product liability and mandated-choice model: why are they incompatible?

I Framing the question

II Arguments against the application of the mandated-choice model

7 Final remarks: the philosophical foundations of freedom of choice and personal autonomy and the specific affiliation of the mandated-choice model to them

"Be Homer’s works your study and delight": when mild paternalism meets Odysseus

Antonios Karampatzos is Associate Professor of Private Law at the Law School of National and Kapodistrian University of Athens.