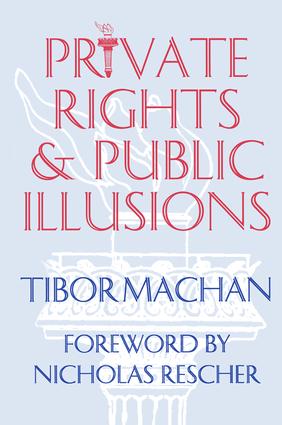 When members of the media address politicians or report on social problems they assume that whatever issues are important in society must be a matter of public or state concern. Yet, the state or government is but a small part of any human society. Machan asserts that while the exact nature of government is a complicated question, only a totalitarian government aims to assume responsibility for every possible concern of its citizenry. Machan believes that the concept "public" is too broadly used to mean any problem that vocal citizens want government to address. Private Rights, Public Illusions focuses on the proper scope of government authority, especially in regard to people's economic or commercial affairs.

The public realm is one wherein we must act collectively and subordinate individual will to a common purpose. But, according to Machan, in the rest of our spheres of concern no such subjugation is necessary or even desirable. Because he sees the public realm as smaller than is generally believed, he argues that if government continues to intervene in affairs outside this public realm, then restrictions on individual liberties will become an obstacle to society's important progress. Private Rights, Public Illusions combines empirical with philosophical analysis and argument. Its radical critique of government intervention will be of interest to policymakers, philosophers, and political scientists, and theorists.

From the foreword by Nicholas Rescher, "[Machan] clearly sees that the state that protects is a state that controls, and that an all-controlling state is to all intents and purposes a prison. Deeply rooted in a widely informed background in political philosophy and American constitutional thought, Machan's book issues a clarion call against such an assault on citizen sovereignty and individual rights . . . [He] proceeds to examine a great host of issues in the domain of contemporary public policy disputes: governmental regulation, prior restraint, occupational health and safety, the right to know, pollution control, product liability, freedom of expressions, and various others. His discussion does not simply ride some ideological hobby horse—as so many in this area do—but is deeply concerned to ground its deliberations in a combined care for philosophical principles, empirical realities, and contemporary texts."