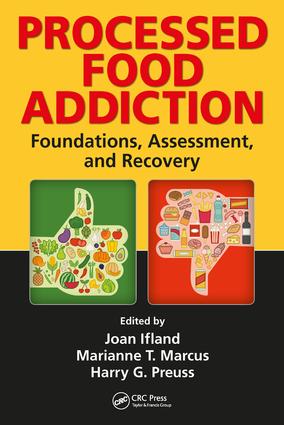 Obesity and eating disorders have stubbornly refused to respond to treatment since the 1990’s. This book organizes the evidence for a possible answer, i.e., that the problem could be one of addiction to processed foods. In a Processed Food Addiction (PFA) model, concepts of abstinence, cue-avoidance, acceptance of lapses, and consequences all play a role in long-term recovery. Application of these concepts could provide new tools to health professionals and significantly improve outcomes.

This book describes PFA recovery concepts in detail. The material bridges the research into practical steps that health professionals can employ in their practices. It contains an evidence-based chapter on concepts of abstinence from processed foods. It rigorously describes PFA pathology according to the DSM 5 Addiction Diagnostic Criteria. It applies the Addiction Severity Index to PFA so that health practitioners can orient themselves to diagnosing and assessing PFA. It contains ground-breaking insight into how to approach PFA in children.

Because the book is evidence-based, practitioners can gain the confidence to put the controversy about food addiction to rest. Practitioners can begin to identify and effectively help their clients who are addicted to processed foods. This is a breakthrough volume in a field that could benefit from new approaches.

Joan Ifland is the chief executive officer of Food Addiction Training, LLC. She received her BA in economics and political science from Oberlin College, MBA from Stanford University, and PhD in interdisciplinary studies with a specialization in addictive nutrition from the Union Institute & University. She has innovated in the field of recovery from food addiction. She was the first chair of the Food Addiction Council for the American College of Nutrition. She is the author of the popular book Sugars and Flours: How They Make Us Crazy, Sick, and Fat. She founded Victory Meals in Houston, TX, which is the first prepared meal company to provide abstinent meals. She is currently developing online approaches to recovery at www.foodaddictionreset.com as well as the Facebook Group, Food Addiction Education. Her early career was spent at the Wisconsin State Legislature and the Continental Group, Stamford, CT.

Marianne T. Marcus is professor emerita at the University of Texas Health Science Center, School of Nursing, Houston, TX. She received her BSN from Columbia University, MA and MEd from Teachers College, Columbia University, and EdD from the University of Houston. Dr. Marcus served as chair of the Department of Nursing Systems, director of the Center for Substance Abuse Prevention, Education and Research, and was the John P. McGovern Distinguished Professor of Addiction Nursing. Her academic focus has been the education of interdisciplinary health profes­sionals to deliver prevention, screening, and treatment services related to substance use disorders. She was the principal investigator for three successive faculty development grants funded by the Center for Substance Abuse Prevention (CSAP) and a federal grant to establish an Addictions Focus graduate subspecialty for nursing.

Dr. Marcus' research has focused on therapeutic community treatment for substance use disor­ders, including an NIH-funded behavioral therapies trial to determine the effect of mindfulness­based stress reduction on treatment in the therapeutic community setting. She has also conducted CSAP-funded community-based participatory research to test substance abuse prevention in vul­nerable communities. Her professional honors include membership in the American Academy of Nursing, the University of Texas Academy of Health Science Education, and the Teachers College Nursing Education Alumni Association Hall of Fame.