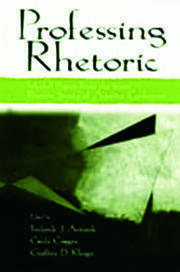 Representing current theory and research in rhetoric, this volume brings together scholarship from a variety of orientations--theoretical, critical, historical, and pedagogical. Some contributions cover work that has previously been silenced or unrecognized, including Native American, African American, Latino, and women's rhetorics. Others explore rhetoric's relationship to performance and to the body, or to revising canons, stases, topoi, and pisteis. Still others are reworking the rhetorical lexicon to comprise contemporary theory. Among these diverse interests, rhetoricians find common themes and share intellectual and pedagogical enterprises that hold them together even as their institutional situations keep them apart.

Topics discussed in this collection include:
*Rhetoric as figurality; comparative and contrastive rhetorics; rhetoric and gender; and rhetorics of science and technology;
*Rhetoric and reconceptions of the public sphere; rhetoric and public memory; and rhetorics of globalization and social change, including issues of race, ethnicity, and nationalism;
*Rhetoric's institutionalized place in the academy, in relation to other humanities and to the interpretive social sciences; and
*The place of rhetoric in the formation of departments and the development of pedagogy

With its origins in the 2000 Rhetoric Society of America (RSA) conference, this volume represents the range and vitality of current scholarship in rhetoric. The conversations contained herein indicate that professing rhetoric is, at the turn of the millennium, an intellectual activity that engages with and helps formulate the most important public and scholarly questions of today. As such, it will be engaging reading for scholars and students, and is certain to provoke further thought, discussion, and exploration.

Contents: Preface. J.A. Aune, Rhetoric as a Vocation: A Weberian Mediation. N. McKoski, The Politics of Professing Rhetoric in the History of Composition and Communication. J. Norton, Sleeping With the Enemy: Recoupling Rhetorical Studies and Rhetoric and Composition. B.S. Bennett, Toward Finding Common Critical and Pedagogical Ground. D. Gussman, Republican Rhetoric and Subversity: Speaking for White Women and American Indians in the 1820s. W.B. Sharer, Rhetorical Education for Political Action: The League of Women Voters and the Subversion of Political Parties in the 1920s. T. Augst, Frederick Douglass, Between Speech and Print. D.E. Moten, When the 'Past Is Not Even Past': The Rhetoric of a Southern Historical Marker. J. Blitefield, Kairos and the Rhetorical Place. A.Z. Macola, Rhetoric and the Body: A Lesson From Ancient Elocutionists. R.M. Jackson, Live From the Operating Room: A Generic Visual Rhetoric. E. Birmingham, Policing the Architectural Canon: The Gendered Discourse of Architectural Studies. K.T. Flannery, Anonymity, Pseudonymity, and Collective Authorship: Rethinking Ethos and the Politics of Disclosure. J.M. Neff, Mediated Ethos: Instructor Credibility in a Televised Writing Course. J.R. Comfort, The Essay Matters Because the Essayist Matters: Personal Disclosures and the Enactment of Ethos in Essays by Black Feminist Writers. H.E. Howells, Apologizing for Authority: The Rhetoric of the Prefaces of Eliza Cook, Isabelle Bird, and Hannah More. S.A. Klein, Romantic Heroism and "Public Character": Ethical Criticism of Performative Traditions in Public Discourse. L.K. Stanley, Paranarrative and the Performance of Creative Nonfiction. J. Carlacio, A. Gillam, Preparing Ethical Citizens for the Twenty-First Century. R. Glejzer, Rhetoric and Ethics: Is "How Should We Proceed?" the Wrong Question? M. Bowdon, Public Schools, Private Ethics: Rhetoric of Service in Composition. C. Chaput, The Rhetoric of Globalization, Graduate Student Labor, and Practices of Resistance. C. Schroeder, Rereading the Literacy Crisis of American Colleges and Universities. B. Vivian, Sophistic Masks and Rhetorical Nomads. E.V. Haskins, Paideia Versus Techne: Isocrates' Performative Conception of Rhetorical Education. D.L. Emery, Thoroughly Modern Vico: The New Science and Counter-Enlightenment Politics. C.G. Herndl, Rhetoric of Science as Non-Modern Practice. W.C. Booth, Ending the War Between Science and Religion: Can Rhetorology Do the Job? J.L. Kastely, The Open Question of the Conversation Between Science and Religion: A Response to Wayne Booth's Rhetorology.