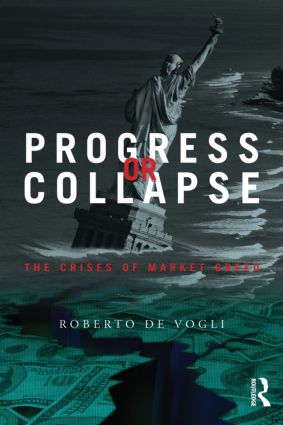 Human progress is heading toward collapse. There are converging ecological crises looming on the horizon: climate change, peak oil, water shortages, fish depletion and food scarcities. The world is on a collision course against the limits of the ecosystem. Modern societies are consuming, polluting and growing as if there is no tomorrow. Indeed, there may not be one.

In Progress or Collapse, Roberto De Vogli guides us through the multiple converging global crises of economic progress. He explores the connections between the environmental crisis and the psychological, social, cultural, political and economic emergencies affecting modern societies. It is not a coincidence, the author argues, that global ecological destruction is occurring in tandem with other crises: rising mental disorders, mindless consumerism, rampant conformism, status competition, civic disengagement, startling social inequalities, global financial instability, and widespread political impasse.

In this hard-hitting analysis, Roberto De Vogli identifies the root cause of all these symptoms of societal breakdown: neoliberalism, defined as market greed. He argues that in recent decades, modern societies have been dominated by a suicidal economic doctrine based on two articles of faith: the greed creed and the market God. The greed creed states that people are nothing but selfish profiteers in a perpetual search for status and wealth. The market God is the belief that all societal and human affairs are best regulated as market exchanges.

What is to be done? Can we stop progress toward collapse? Given the current distribution of power and wealth, and the state of psychological and political inertia in which we are trapped, our chances of redefining progress around alternative values and embracing a new philosophy of life are slim. Yet, the history of human emancipation has often been shaped by giant leaps forward. In the past, civic struggles have overcome "the limits of the possible". Whether this will happen again in the future is the central question of our time.

This book will be of interest to researchers and students of ecology, psychology, public health, epidemiology, human development, political philosophy, economics, sociology and politics.

'Concerned for the future of humanity? Then read this book. Others cover just one aspect of the political, social, environmental and economic challenge facing humanity. But the transformation we so urgently need must start from an understanding of the interlocking system as a whole. With his breadth of vision, fearlessness and unerring eye for the truth, this is what De Vogli provides.' — Richard Wilkinson, Author of 'The Spirit Level'

'If you think the world's current economic problems are just a blip, with normal service soon to be resumed, think again. As De Vogli brilliantly and succinctly reveals in this wide-ranging panorama of a book, the way we live now is simply not sustainable. In the absence of desperately urgent action that redefines our relationship with the planet, the future looks endlessly bleak; that is, of course, if we have any future at all.' — Bill McGuire, Author of 'Seven Years To Save the Planet'

'De Vogli is one of the new ecological thinkers who show that climate change is the most dangerous product of Western corporate capitalism. In a masterful and highly accessible historical review of the development of corporate globalization, he shows that any struggle to save the planet requires a direct confrontation with the Wall Street elites and neo-liberal ideologues who created and now rule our unsustainable world economy. De Vogli shows that the world's prospects for survival depend now on repudiating the 'market greed' driving our elites and our own psyches, recanting the religion of growth, and crafting a new post-consumerist economy based on equality and our non-market needs for social fulfillment.' — Charles Derber, Author of 'Greed to Green'

‘The story of our generation is the social destructiveness of markets ‘free’ to operate in the interests of the few rather than under the control of society as a whole. In Progress or Collapse that story is told and analyzed with insight, revealing the depth and breadth of what we have lost due to subservience to the ideology of consumerism and greed. Anyone who hopes for a reversal of the current descent into market barbarism should read this book.' — John Weeks, Author of 'Capital, Exploitation and Economic Crises'

'Roberto De Vogli has written a brilliant book that unveils the destructive nature of the so-called 'free market' and neoliberal doctrines so widely admired in mainstream economic circles. Progress or Collapse is a scary, but also stimulating essay that invites reflections, critical thinking and, above all, civic outrage.' — Thom Hartmann, Author of 'The Last Hours of Ancient Sunlight'

Prologue 1. A Turning Point Or A Point Of No Return? 2. The Growth Delusions 3. United We Spend 4. Chains Of A Free World 5. Market Mediocracies 6. The Market Greed Doctrine 7. Divided We Stand 8. Out Of Control 9. State Of Political Inertia 10. Progress Or Collapse