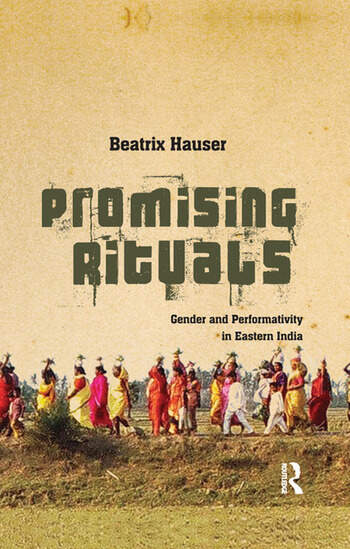 This book shows how the performance of rituals influences the understanding that Hindu women form of their own selves, their sense of femininity, identity as well as their role and position in the lived-in world, and vice versa. Drawn from an intensive ethnographic fieldwork in southern Orissa, each section of the book takes a close look at a specific ritual practice, in exploring concepts such as purity/pollution, religious observances (such as fasting), deity possession, associated beliefs and attitudes, as also celebrated traditions such as Thākurānī Yātrā, local processions, and the role of female ritual specialists.

The study uses the premise that religious practices in themselves are neither restricting nor liberating; rather rituals provide a perceptual context with the ability to affect the self-understanding of participants, as also their conception of agency, in a way that spills across non-ritual spheres. Conceptualizing gender identity as resulting from seen, but mostly unnoticed, everyday activities and approaching cultural performances as sites of collectively defining the self, the author offers a telling and vivid account of how women perceive, realize and reflect on religious ideas, while engaging in rituals and, by doing so, negotiate complex gender norms. The book also examines the assumptions of recent theories on the social construction of identities, often-debated impact of religion on women, performativity, self-identity, and ritual agency in considering ‘doing’ gender in a traditional, non-Western context.

List of Plates. List of Maps. Glossary. Notes on Transcription. Acknowledgements. Introduction: Doing Gender in Southern Orissa 1. Tasting Ritual: How to Fast for a Good Husband 2. Shared Pain – Shared Joy: On Ritual Agency and Composition 3. Periodically Untouchable: Female Bodies and the Performance of Impurity 4. Contested Bodies: Deity Possession as a Religious Idiom 5. (Re-) Calling the Goddess: The Emergence of Divine Presence 6. Nocturnal Encounters: Living Mothers and Divine Daughters 7. Divine Play or Subversive Comedy? On Costuming, Gender and Transgression 8. The Limitations of Ritual: Female Politics and the Public. Afterword: Promising Rituals. Bibliography. About the Author. Index

Beatrix Hauser is Adjunct Associate Professor (Privatdozentin), Institute of Social and Cultural Anthropology, Martin-Luther-University, Halle-Wittenberg, Germany. She holds a PhD and a Habilitation (Postdoctoral Lecture Qualification) in social anthropology. Her research interests lie in anthropology of the body, anthropology of religion, anthropology of theatre and performance, visual anthropology, transculturality and gender. She has published numerous articles in various international journals and edited volumes, and is the author of Mit irdischem Schaudern und göttlicher Fügung: Bengalische Erzähler und ihre Bildvorführungen [With Earthly Dread and Divine Decree: Bengali Storytellers and their Scroll Performances] (1998), in German; and Yoga Traveling: Conceptualizing Body and Self in Transcultural Perspective (edited volume, forthcoming).