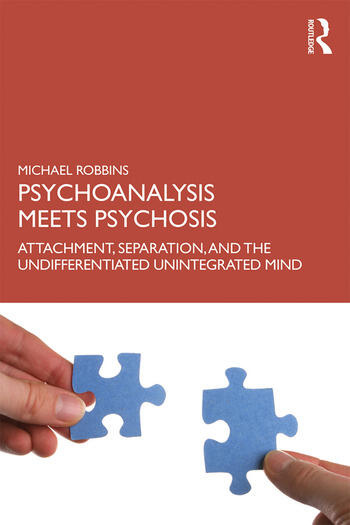 Psychoanalysis Meets Psychosis proposes a major revision of the psychoanalytic theory of the most severe mental illnesses including schizophrenia. Freud believed that psychosis is the consequence of a biologically determined inability to attain and sustain a normal or neurotic mental organization. Michael Robbins proposes instead that psychosis is the outcome of a different developmental pathway. Conscious mind functions in two qualitatively different ways, primordial conscious mentation and reflective representational thought, and psychosis is the result of persistence of a primordial mental process, which is adaptive in infancy, in later situations in which it is neither appropriate nor adaptive.

In Part I Robbins describes how the medical model of psychosis underlies the current approach of both psychiatry and psychoanalysis, despite the fact that neuroscience has failed to confirm the model’s basic organic assumption. In Part II Robbins examines two of Freud’s models of psychosis that are based on the assumption of a constitutional inability to develop a normal or neurotic mind. The theories of succeeding generations of analysts have for the most part reiterated the biases of Freud’s two models, so that psychoanalysis considers the psychoses beyond its scope. In Part III Robbins proposes that the psychoses are the result of disturbances in the attachment-separation phase of development, leading to maladaptive persistence of a primordial form of mental activity related to Freud’s primary process. Finally, in Part IV Robbins describes a psychoanalytic approach to treatment based on his model. The book is richly illustrated with material from Robbins’ clinical practice.

Psychoanalysis Meets Psychosis has the potential to undo centuries of alienation between society and psychotic persons. The book offers an understanding of severe mental illness that will be novel and inspiring not only to psychoanalysts but to all mental health professionals.

PART I: NOT FULLY HUMAN: THE UNWITTING COLLUSION BETWEEN MEDICINE AND PSYCHOANALYSIS

1: Not fully human: Psychiatric and psychoanalytic understandings of psychosis

2: the medicalization of madness: Evolution of the equation of psychosis with degeneracy

3: Freud’s attempt to treat psychosis as though it were neurosis

4: Freud’s three models and their offspring: I: The inability to relate

5: Freud’s three models and their offspring: IIA: The inability to integrate mind and become neurotic: The European Kleinian iteration

8: Two conscious mental processes: The role of primordial consciousness in psychosis and other human phenomena

9: Revisiting the Rat Man as an example of primordial consciousness.

10: Psychosis as a disorder of attachment and separation-individuation

11: Psychiatric treatment of psychosis: Transforming psychosis from a socially disruptive to a socially adaptive disease

12: Studies of the efficacy of psychological and psychoanalytic therapies of psychosis

14: Qualities of a psychoanalytic therapist of psychosis

15: Patients write about their therapy

16: The 11 year therapy of a chronic paranoid schizophrenic woman

Michael Robbins is former Professor of Clinical Psychiatry at Harvard Medical School, USA. He is a member of the American and International Psychoanalytic Associations. His previous books include Experiences of Schizophrenia (1993), Conceiving of Personality (1996), The Primordial Mind in Health and Illness: A Cross-Cultural Perspective (2011), and Consciousness, Language and Self: A Psychoanalytic, Linguistic and Anthropological Exploration of the Dual Nature of Mind (2018).

"Robbins’ goal is to introduce psychoanalysis to psychosis in a way that is internal to psychoanalysis and at the same time independent of the neurosis model and the biases that attend it. He does so successfully in this carefully reasoned and clinically illustrated book, as he returns us to a theory of primitive mind and primary process that Freud himself intimated but never further developed. In so doing, Robbins joins the increasingly interesting minority of analysts who are trying to extend psychoanalytic theory to include the understanding and treatment of psychoses.

For Robbins, psychosis is the consequence of a developmental pathway separate and independent from that of neurosis. It begins with problems of attachment and separation that produce early failures to separate self from object and integrate a cohesive sense of self. These failures leave one incapable of experiencing, sustaining and resolving intrapsychic conflict and lead "to inappropriate and maladaptive persistence of primordial conscious mentation in contexts where reflective representational thought would be appropriate and adaptive."-Howard B. Levine, MD, Editor-in-Chief, The Routledge Wilfred R. Bion Studies Book Series