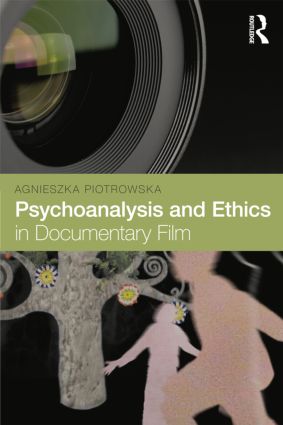 Psychoanalysis and Ethics in Documentary Film

This distinctively interdisciplinary approach to the subject encompasses filmmaking, psychoanalysis, philosophy and popular culture and offers a unique insight into documentary film practice from a psychoanalytic perspective. At the heart of the enquiry is belief that ‘transference-love’ is present in the documentary encounter. With a focus on testimony-driven film and a foreword by Michael Renov, who calls this book 'a radical and compelling account', Psychoanalysis and Ethics in Documentary Film covers a range of topics including:

Ideal for film studies scholars, psychoanalysts, psychotherapists and psychotherapeutically engaged professionals, as well as filmmakers, culture studies students and anyone interested in the process of documentary-making and contemporary culture, this work offers a unique approach.

'…Psychoanalysis and Ethics in Documentary Film is successful in illuminating the importance of the hidden emotional encounter between the subject/filmmaker, while also offering an enjoyable read.'

"It is the considerable contribution of Piotrowska to have understood just how much can be at stake for any filmmaker/subject encounter in the documentary field. After all, lives are being narrated, bodies represented, trust gained and confidences shared. In this fascinating volume, Piotrowska dares to suggest that this scenario and the depths of the soul and psyche it touches are not so far afield from that which obtains in the analytic setting: the unconscious desires define the encounter. Here she evokes the Lacanian construct – le sujet supposé savoir – the subject supposed to know… It is Piotrowska’s bold claim that such a love may also ensue between the filmmaker and her subject. In the most dramatic section of this book, Piotrowska in fact takes us through one such encounter via her film about a conman. A filmmaker’s production diary is transformed into a case study exploring the shared intimacies, emotional revelations and false promises of a love affair – or analysis – gone awry. Particularly given the role that disparities of age, gender and power play in this relationship (Piotrowska is the younger female who wields the camera), it is as though Dora and Freud are writing as collaborators who occasionally shift places on the couch. It is a dizzying display, juicy of course but also deeply insightful for what it has to tell us about the psychic dynamics potential to any documentary production… I leave you with Agnieszka Piotrowska’s radical and compelling account believing that it has introduced something new, important and no doubt controversial to the documentary studies arena."

Michael Renov, Professor of Critical Studies and Documentary at the University of Southern Californi, USA

‘Transference-love and documentary film - how can they be thought of together? The conjunction of the two stands at the core of ethical pursuit, theoretical reflection and engaged practice that Agnieszka Piotrowska draws for us in this outstanding, lucid and inspiring book.’

‘This passionate book offers a radical new understanding of the relationship between documentary filmmakers and their ‘subjects’ – the people who participate in their films. Drawing on her own background as a filmmaker alongside a deep immersion in the literature on psychoanalysis and film, Agnieszka Piotrowska shows how complicated and intense the involvement of filmmakers with their subjects can be. The book announces a remarkable and distinctive interdisciplinary perspective that uses psychoanalysis, philosophy, social theory and film studies to explore the intense underside of the documentary experience.’

‘This book makes a significant contribution to understanding documentary film through the complex scholarly study it presents of the interview as an emotional and ethical encounter between filmmaker and interviewee/participant, developing philosophical and psychoanalytical arguments that are made vivid through her discussion of her own professional film-making experience and her examination of a wide range of films.’

‘This impressive book connects the author’s own practice as documentary filmmaker with a range of theoretical reflections drawn mainly from psychoanalysis in the Lacanian tradition. The wide theoretical sweep of the book includes careful study of notions developed by other writers such as Butler, Lévinas, Badiou and Žižek. The analysis of transference in research provides a compelling argument for film makers, and all of those involved in representational practice, to attend to ethics in their work. Ethics is at the core of this book, and fuels the narrative of an engaging and timely study. The thoughtful and illuminating analyses will be of interest to film scholars, psychoanalysts and those working in the broader field of cultural studies. Agnieszka Piotrowska explores and redefines key debates and takes forward our understanding of film, subjectivity and research.’

‘Sign your rights away forever and appear in my documentary film for free! In this meticulously researched and wide-ranging exploration of the intimate relationship between subject and filmmaker, encompassing psychoanalysis, ideology and ethics, Agnieszka Piotrowska controversially suggests that the subject may fall into reciprocated love with the filmmaker through transference. Piotrowska's work is a fascinating, important and thought-provoking addition to documentary film theory.’

'Pitrowska's book clearly offers an opportunity for dialogue between documentary filmakers, psychoanalytic theorists and practitioners and qualitative researchers. It is most accessible to filmmakers, film theorists, and cultural theorists using Lacan.'

'Agnieszka Piotrowska's Psychoanalysis and Ethics in Documentary Film considers the under-theorized relationship at the heart of many documentary films… Piotrowska approaches this inter-subject encounter as both a practitioner - for years she directed documentaries for major broadcaster - and a theoretician."

Agnieszka Piotrowska is an internationally recognized award-winning filmmaker, best known for her documentary Married to the Eiffel Tower. She was awarded a PhD from Birkbeck College, University of London, and is Senior Lecturer in Media Arts at the University of Bedfordshire.