Psychology in the Soviet Union Ils 272 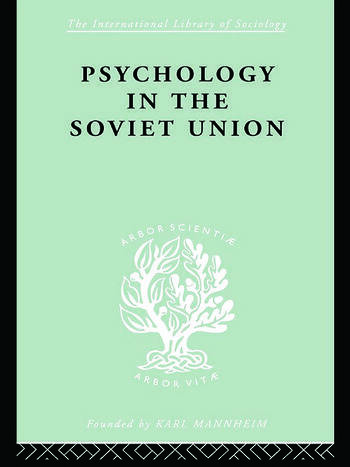 Psychology in the Soviet Union Ils 272

This is a collection of papers created from a visit by teachers and educationalists to the U.S.S.R in April 1955 by invitation of Academy of Educational Sciences of the R.S.F.S.R. The aim of this volume is to familiarize English readers with the general direction of Soviet psychology, but designed to be of interest to teachers as well as psychologists.

PART I Psychological Research, 1953–5, PART II The Physiology of Higher Nervous Activity and Child Psychology, The Psychology of Understanding, Involuntary and Voluntary Attention, Higher Nervous, Activity and the Problem of Perception, Raising the Sensitivity of the Visual Analyser, The Development of Voluntary Movements, The Role of Language in the Formation of Temporary Connections PART III The Basis of Spatial, The Theory of Memory, The Formation of Associative Connections: an experimental investigation PART IV Child Psychology, Some Aspects of the Psychology of Teaching, The Development of Children’s Speech and Thought, Specific Features of the Intellectual Work of Unsuccessful Pupils, An Experimental Study in the Formation of Mental Actions, The Nature and Formation of Human Psychic PART V A Contribution towards the Definition of ‘Skill’ and ‘Habit’, Objective Method in Psychology, Questions of Psychological Theory