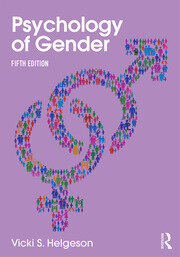 Noted for its fair and equal coverage of men and women, this book reviews the research and issues surrounding gender from multiple perspectives including psychology, sociology, anthropology, and public health, with an emphasis on the interaction between biological and social theories. The implications of social roles, status, and gender-related traits on relationships and health that are central to students' daily lives are emphasized throughout. Students learn how to distinguish the similarities and differences between the sexes and the theories that explain the differences. Methodological flaws that may impact the observance of sex differences are also examined.

Learning activities and pedagogical tools included in the text:

New to the 5th Edition:

Divided into three parts, each section builds on the previous one. First, gender and the development of gender roles across cultures are introduced. Scientific methods used to study gender, attitudes toward gender, and the latest data and theories on sex differences in cognitive, social, and emotional domains are then introduced. Theories of gender-role development, including evolutionary, social learning, social role, and gender schema theories are reviewed along with the implications of gender on achievement. Part one reviews the key information on the similarities and differences between the sexes and the theories that explain the differences which lay the foundation for the remainder of the book. Part two examines the role of gender in relationships including communication styles and the impact of these interactions on friendship and romantic relationships. The third part examines the role of gender on physical and mental health. The effects of marriage and parenting on health are reviewed, including domestic abuse, along with how gender affects the association between work and health.

This is an ideal text for upper level gender-focused courses including the psychology of gender, psychology of women or men, gender issues, and gender, women’s, or men’s studies taught in psychology, women’s studies, gender studies, sociology, and anthropology.

Vicki S. Helgeson is Professor of Psychology and Director of the Gender, Relationships, and Health Lab at Carnegie Mellon University.

"An excellent and engaging resource for those seeking multi-disciplinary evidence-based insight into the broad impact of gender and gender differences. Ideally suited for upper-level undergraduate or graduate-level." – Barbara Masser, University of Queensland, Australia

"A well-written and comprehensive textbook, which equally addresses women and men. Helgeson’s thorough and objective coverage of the empirical research on each topic is a rare find in this domain." – Jennifer Fillo, University of Houston, USA

"This text draws readers in with engaging content, clear writing, and nuanced and vast research coverage. It will inspire students of all levels to reflect on their gendered experiences and to think critically and scientifically." – Sara M. Gorchoff, Monmouth College, USA

"Helgeson does an excellent job of presenting a comprehensive, multi-faceted examination of the psychology of gender in an engaging and research-based format. She also provides a nice balance of theory and empirical research on gender differences in various aspects of relationships and health." – Kristin D. Mickelson, Arizona State University, USA