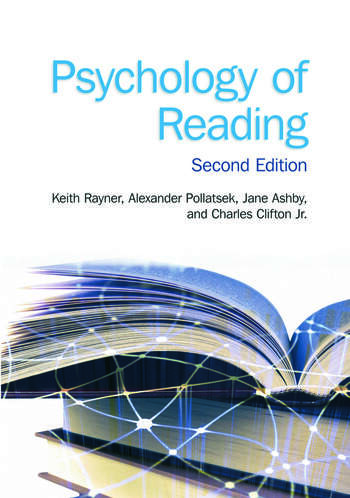 Reading is a highly complex skill that is prerequisite to success in many societies in which a great deal of information is communicated in written form. Since the 1970s, much has been learned about the reading process from research by cognitive psychologists. This book summarizes that important work and puts it into a coherent framework.

The book’s central theme is how readers go about extracting information from the printed page and comprehending the text. Like its predecessor, this thoroughly updated 2nd Edition encompasses all aspects of the psychology of reading with chapters on writing systems, word recognition, the work of the eyes during reading, inner speech, sentence processing, discourse processing, learning to read, dyslexia, individual differences and speed reading.

Psychology of Reading, 2nd Edition, is essential reading for undergraduates, graduates, and researchers in cognitive psychology and could be used as a core textbook on courses on the psychology of reading and related topics. In addition, the clear writing style makes the book accessible to people without a background in psychology but who have a personal or professional interest in the process of reading.

Alexander Pollatsek is Emeritus Professor of Psychology and Research Professor at the University of Massachusetts Amherst.  His primary research interests are in reading, word recognition, scene perception, and driving behavior.  He has published widely in each area.

Jane Ashby is an Assistant Professor of Psychology at Central Michigan University. Her primary interests are in skilled reading, phonological processing, dyslexia, and reading development.

Charles Clifton, Jr is Emeritus Professor of Psychology and Research Professor at the University of Massachusetts Amherst.  He is primarily interested in psycholinguistics and has published numerous papers dealing with linguistic processing, parsing, and syntactic ambiguity.

"I don’t think it’s possible to overstate the importance of this book. It’s written by some of the very best-known and respected researchers in the field who, to a very large degree, have defined the field itself. In short, reading research would not have been the same without these authors, and to the present day they’re still amongst the most prominent scholars in the world."

"I absolutely loved reading this book. The level of detail and analysis provided in several of the chapters was exceptional. In fact, given the attention to detail, and the continual use of presenting data followed by argument/criticism to build a position, results in a book that will be valuable at many levels."

"The original Psychology of Reading by Rayner and Pollatsek - of which this current book is a thoroughly revised and updated version - has often been described as a seminal book. Only too frequently this term is used to describe books which have received considerable attention in the field but in hindsight fail to meet the criterion for using that specific, powerful epithet . . . The current book is a rightful heir to the throne of the [first edition]."