Psychosis, Psychoanalysis and Psychiatry in Postwar USA
On the borderland of madness 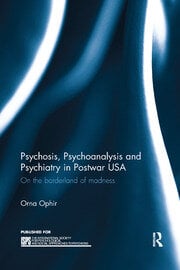 Psychosis, Psychoanalysis and Psychiatry in Postwar USA: On the borderland of madness

Covering the last four decades of the 20th century, this book explores the unwritten history of the struggles between psychoanalysis and psychiatry in postwar USA, inaugurated by the neosomatic revolution, which had profound consequences for the treatment of psychotic patients. Analyzing and synthesizing major developments in this critical and clinical field, Orna Ophir discusses how leading theories redefined what schizophrenia is and how to treat it, offering a fresh interpretation of the nature and challenges of the psychoanalytic profession. The book also considers the internal dynamics and conflicts within mental health organizations, their theoretical paradigms and therapeutic practices.

Opening a timely debate, considering both the continuing relevance and the inherent limitations of the psychoanalytic approach, the book demonstrates how psychoanalysts reinterpreted their professional identity by formalizing and disseminating knowledge among their fellow practitioners, while negotiating with neighboring professions in the medical fields, such as psychiatry, pharmacology and the burgeoning neurosciences. Chapters explore the ways in which psychoanalysts constructed – and also transgressed upon – the boundaries of their professional identity and practice as they sought to understand schizophrenia and treat its patients. The book argues that among the many relationships psychoanalysis sustained with psychiatry, some weakened their own social role as service providers, while others made the theory and practice of psychoanalysis a viable contender in the jurisdictional struggles between professions.

will appeal to researchers, academics, graduate students and advanced undergraduates who are interested in the history of psychoanalysis, psychiatry, the medical humanities and the history of science and ideas. It will also be of interest to clinicians, health care professionals and other practitioners.

Orna Ophir is Adjunct Associate Professor in the Humanities at the School of Arts and Sciences, Johns Hopkins University, Baltimore, USA, and Adjunct Associate Professor in the Doctoral Studies Program in Clinical Psychology at Long Island University, New York, USA. She is a licensed clinical psychologist in Tel Aviv, Israel, and a licensed psychoanalyst in New York, USA.