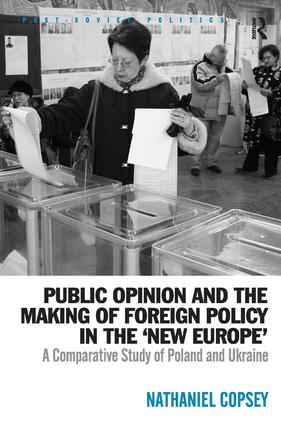 A Comparative Study of Poland and Ukraine, 1st Edition

By drawing a new boundary between the EU and its eastern neighbours, the European Union has since 1989 created a frontier that has been popularly described in the frontier states as the new 'Berlin Wall'. This book is the first comparative study of the impact of public opinion on the making of foreign policy in two Eastern European states on either side of the divide: Poland and Ukraine. Focusing on the vocal, informed segment of public opinion and drawing on results of both opinion polls and a series of innovative focus groups gathered since the Orange Revolution, Nathaniel Copsey unravels the mystery of how this crucial segment of the public impacts on foreign policy makers in both states. He also takes a closer look at the business community and the importance of economic factors in forming public opinion. The book presents a fresh approach to our understanding of how the public's view of the past influences contemporary politics.

'The decision to award the 2012 European Championship finals jointly to Poland and Ukraine was symbolic of the fact there are many versions of Europe beside the EU. Nathaniel Copsey provides an invaluable guide to the key relationship between two states at the fault-line between the EU's Eastern Partnership and Russia's own increasingly assertive neighbourhood policy, skilfully guiding the reader through elite politics, public opinion and historical controversies to produce a must-read text for all students of the post-enlargement EU and politics and international relations in Eastern Europe.' Andrew Wilson, European Council on Foreign Relations 'Copsey draws on the outstanding analysis of historians such as Timothy Snyder, Roman Szporluk, and Norman Davies, and he also refers to recent political analysis, notably that of Roman and Kataryna Wolczuk, Taras Kuzio, and Andrew Wilson. The author goes beyond these published works in English, however, and uses both original documents and secondary works available only in Polish and Ukrainian. One of the book's strengths lies in its focus on public opinion - and especially the use of local focus groups - in both countries. … The detailed analysis of four recent contentious case studies in Polish-Ukrainian relations certainly makes for interesting reading… the book contains useful data and many insightful observations…' Slavic Review

Nathaniel Copsey is a Senior Lecturer at the Aston Centre for Europe and was previously a CEELBAS Research Fellow at the University of Birmingham. His research centres on relations between the European Union and its eastern neighbours together with the politics and governance of Poland and Ukraine.