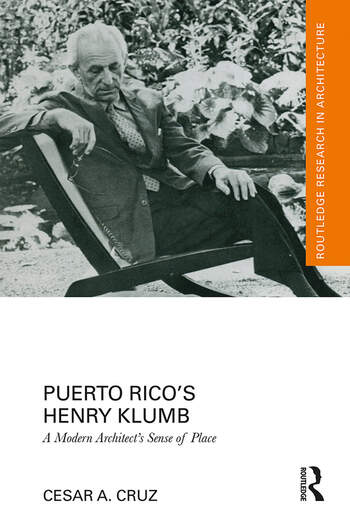 This book follows Henry Klumb’s life in architecture from Cologne, Germany to Puerto Rico. Arriving on the island, Klumb was a one-time German immigrant, a moderately successful designer, and previously a senior draftsman with Frank Lloyd Wright.

Over the next forty years Klumb would emerge as Puerto Rico’s most prolific, locally well-known, and celebrated modern architect. In addition to becoming a leading figure in Latin American modern architecture, Klumb also became one of Frank Lloyd Wright’s most accomplished protégés, and an architect with a highly attuned social and environmental consciousness. Cruz explores his life, works, and legacy through the lens of a sense of place, defined as the beliefs that people adopt, actions undertaken, and feelings developed towards specific locations and spaces. He argues that the architect’s sense of place was a defining quality of his life and work, most evident in the houses he designed and built in Puerto Rico.

Chapter 1 – Looking into a Modern Architect’s Sense of Place

A sense of place – a theoretical underpinning

Places as sources of meaning, and other factors leading to a sense of place

Searching for evidence of phenomenological thinking

Klumb’s German period, 1905 – 1927: the setting that began to shape a young modern architect

Lasting impressions of the American Southwest and Klumb’s experiences there

The jibaro hut in Klumb’s pamphlets

The jibaro hut reimagined through the Teacher’s Farms

Chapter 6 – The Grid and the Landscape: The Haeussler Residence, 1945

The grid and the landscape within a series of oppositions

The varied moods of nature at Klumb’s terraces, verandas, cross-ventilated spaces, and breezeways

The Marrero and Velez houses

The jibaro hut reimagined once more

Impressions of the Klumb House

An early personal transition for Klumb in Puerto Rico

Viewing the Klumb House through the architect’s naturalistic worldview

Cesar A. Cruz is an architectural historian and educator. He has taught architectural history and theory, building structures, and design in Illinois, Indiana, and New Mexico. In August 2016 he received his Doctorate in Architecture from the University of Illinois in Urbana-Champaign.