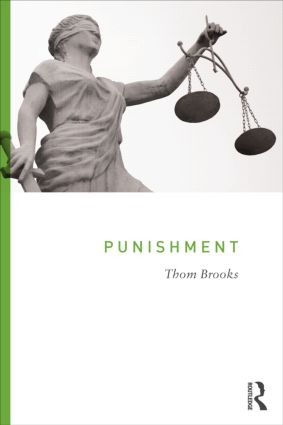 Punishment is a topic of increasing importance for citizens and policymakers. Why should we punish criminals? Which theory of punishment is most compelling? Is the death penalty ever justified? These questions and many others are addressed in this highly engaging guide.

Punishment is a critical introduction to the philosophy of punishment, offering a new and refreshing approach that will benefit readers of all backgrounds and interests. The first critical guide to examine all leading contemporary theories of punishment, this book explores – among others – the communicative theory of punishment, restorative justice, and the unified theory of punishment. Thom Brooks examines several case studies in detail, including capital punishment, juvenile offending, and domestic abuse. Punishment highlights the problems and prospects of different approaches in order to argue for a more pluralistic and compelling perspective that is novel and groundbreaking.

"Lucid, fair-minded, and well-informed, Thom Brooks’ Punishment offers a superb introduction to a complex and contentious subject. Many a perplexed student will find illumination in his patient discussion of each of the leading theories. The way Brooks shows their interconnectedness and application in practice – to capital punishment, juvenile offenders, domestic violence, and the like – will interest not only students but scholars as well."

"As a topic in moral and political philosophy, punishment has been jolted back to life. In the last quarter century, retribution has returned with a vengeance, both in the theoretical literature and (with a very different emphasis) in public policy. The rise of the victim as a player in the criminal justice system has also fuelled a counter-trend, placing an emphasis on redress. Human rights, privatization, globalization, the rise of the therapist, the lobbyist, the terrorist: all have affected our ways of punishing and of thinking about punishment. A new survey of the terrain is overdue. And who better to conduct it than Thom Brooks, whose grasp of the literature and feel for the issues is second to none? From the noble ideals of ‘communicative’ theory to the grim realities of children in prison: in Punishment Brooks covers it all with insight, rigour, and energy."

"Thom Brooks has produced a valuable introduction to, and critical survey of, current theoretical approaches to punishment together with an analysis of their implications for practice. In addition, he has provided a spirited defence of a new, unified theory inspired by the British Idealists and encompassing retributive, consequentialist, and restorative elements. Written in a lucid and engaging style, the book will interest a wide range of readers – students, theorists of punishment, as well as those engaged in criminal justice policy."

"Thom Brooks’ Punishment is a rare thing: a book about a complex and important topic that is both of interest for experts and accessible to non-experts."

"This book has the ability to speak to a wide audience about the theoretical and practical issues surrounding the discussion of punishment. It’s illustration of the application of general and hybrid theories to case studies of different types of crime allows the reader to understand how such theories can be applied and discussed in practice in contemporary western society." — Helen Nichols, Prison Service Journal

Thom Brooks is Reader in Law at Durham University. He is the editor and founder of the Journal of Moral Philosophy.