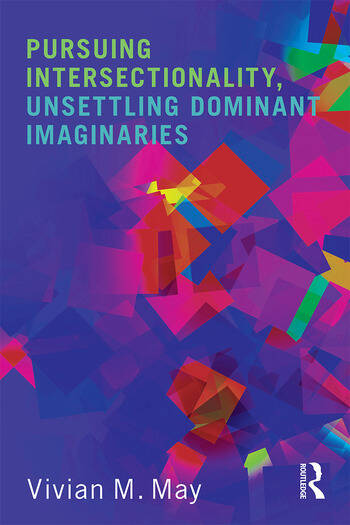 Vivian M. May is Associate Professor and Chair of Women’s & Gender Studies at Syracuse University. She is author of Anna Julia Cooper, Visionary Black Feminist (Routledge, 2007), and of numerous articles and chapters focused on Black feminist intellectual history, feminist theory and literature, and theorizing Women’s Studies as a field. Recently, May was elected President of the National Women's Studies Association for a two-year term (2015 & 2016).

Vivian May's book is the first that analyzes intersectionality from a broad historical vantage point, taking readers back to 19th century Black feminist discourse. Complex, nuanced, thorough, and meticulous in her engagement with the debates that now swirl around this influential theoretical analytic tool, May engages its critics and advocates with passion and clarity. A must read for scholars and practitioners committed to social justice movements and anti-oppression ideologies.

At once fundamental and groundbreaking, instructive and provocative, Pursuing Intersectionality is a vital reader on a vital subject. May provides a clarifying analysis regarding the provenance, contestations, current use and disuse, and future of intersectional theory and practice in the academy and beyond.

Some 25 years after being coined by Kimberle Crenshaw, the term intersectionality, if not always the idea, has traveled well beyond its origins. In this very readable book, Vivian May traces what has been lost along the way, including complexity, nuance, and perhaps most importantly, intersectionality’s foundational commitment to anti-subordination and justice. She then points the way forward with a set of concrete recommendations that will be welcomed by feminists working in fields from policy, to politics, to research.

Vivian May provides a "careful and thorough examination of [the] flattening and co-opting [of ntersectionality], threatening to extinguish its radical aim for justice. At the same time, the book provides casual or unfamiliar readers of intersectionality texts with a faithful consideration of its multiple facets in an accessible form and progression. […] the book challenges feminist to consider how we have and may still drift toward a single-axis gender first approach […], even when identifying our theoretical approach as intersectional.

Journal of Women and Social Work

"The sections are broken down into manageable chunks that allow the reader to take the time to comprehend before moving on to the next element of the matrix. The book provides an in-depth exploration and is complex. […] The important elements of intersectionality are made clear through the inclusion of research examples throughout the book. […] Rather than ignoring the issues that seem to arise with the application of intersectionality, this book seeks to address issues brought up through critique, debunking the presented myths, and explaining in detail justification for its use. […] From my own perspective as a researcher using an intersectional framework, this book made me rethink my own methods and approach."

"Pursuing Intersectionality, Unsettling Dominant Imaginaries offers a thorough and comprehensive analysis of the complexities of intersectionality and explores how its potential may be enhanced and maximized. […] Through her analysis, May convincingly demonstrates that intersectionality has been resisted, misunderstood, and misapplied by both supporters and critics of the framework. […] Pursuing Intersectionality is a timely, useful, and important book. […] By synthesizing the major concepts, practices, and politics of intersectionality and proposing ways to deeply engage in theoretical and political work to combat suffering and oppression in a single volume, May offers hope, tools, and inspiration for radical social change. […] the book should be highly relevant to a multidisciplinary audience with different degrees of familiarity and engagement with the concept."

Hypatia: A Journal of Feminist Philosophy