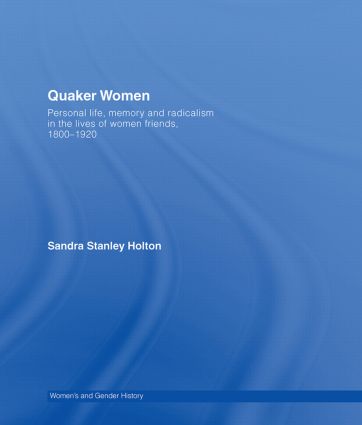 Personal Life, Memory and Radicalism in the Lives of Women Friends, 1780–1930, 1st Edition

One nineteenth-century commentator noted the ‘public’ character of Quaker women as signalling a new era in female history. This study examines such claims through the story of middle-class women Friends from among the kinship circle created by the marriage in 1839 of Elizabeth Priestman and the future radical Quaker statesman, John Bright.

The lives discussed here cover a period from the late eighteenth to the early twentieth centuries, and include several women Friends active in radical politics and the women’s movement, in the service of which they were able to mobilise extensive national and international networks. They also created and preserved a substantial archive of private papers, comprising letters and diaries full of humour and darkness, the spiritual and the mundane, family confidences and public debate, the daily round and affairs of state.

The discovery of such a collection makes it possible to examine the relationship between the personal and public lives of these women Friends, explored through a number of topics including the nature of Quaker domestic and church cultures; the significance of kinship and church membership for the building of extensive Quaker networks; the relationship between Quaker religious values and women’s participation in civil society and radical politics and the women’s rights movement. There are also fresh perspectives on the political career of John Bright, provided by his fond but frank women kin.

This new study is a must read for all those interested in the history of women, religion and politics.

'…enormous importance to students of Quaker history… a book which should serve as a benchmark for other studies of 'networked families' in this period. To produce such a sustained, coherent and carefully nuanced account from a potentially overwhelming body of source material is a remarkable achievement.' Quaker Studies

Sandra Holton is Senior Research Fellow in the Department of History, University of Adelaide, South Australia. Her previous publications include Suffrage Days (Routledge, 1996), Feminism and Democracy (Cambridge University Press, 1986) and she co-edited Votes for Women (Routledge, 2000). Her research into on the Priestman – Bright circle has been published in journals including American Historical Review, Victorian Studies, Journal of Women’s History and Women’s History review.

Recent years have witnessed a variety of challenges to the legitimacy of women's history, ranging from the deconstructions of French theory to the advent of 'gender' studies with its post-feminist implications. This series aims to re-establish women's history and to continue to challenge the assumptions of much mainstream history.