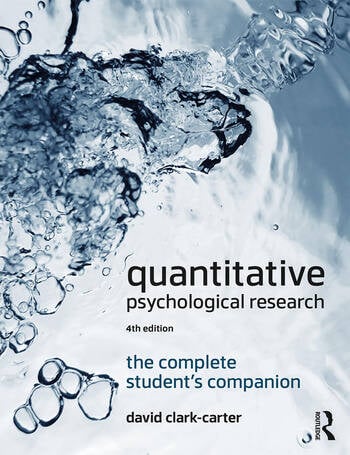 Quantitative Psychological Research: The Complete Student's Companion expertly guides the reader through all the stages involved in undertaking quantitative psychological research: designing a study, choosing a sample of people, undertaking the study, analysing the data, and reporting the research.

Accessibly written and clearly presented, the book is designed for anyone learning to conduct quantitative psychological research. It covers the full research process, from the original idea to reporting the completed study, emphasising the importance of looking beyond statistical significance in evaluating data. The book provides step-by-step guidance on choosing, interpreting and reporting the appropriate analysis, featuring worked examples and extended calculations as appendices for advanced readers.

This edition features new chapters on exploratory factor analysis, logistic regression and Bayesian statistics, and has been thoroughly updated throughout to reflect the latest research practices. Care has been taken to avoid tying the book to any specific statistical software, providing readers with a thorough grounding in the basics no matter which package they go on to use.

Whether you’re at the beginning of your undergraduate degree or working towards your masters or doctorate, this book will be invaluable for anyone looking to understand how to conduct quantitative psychological research.

1 The methods used in psychological research

2 The preliminary stages of research

3 Variables and the validity of research designs

4 Research designs and their internal validity

5 Asking questions I: interviews and surveys

12 Analysis of differences between a single sample and a population

15 Analysis of differences between two levels of an independent variable

17 Analysis of designs with more than one independent variable

18 Subsequent analysis after ANOVA or χ2

19 Analysis of relationships I: correlation

III. Comparing a sample with a population

IV. The power of a one-group z-test

VI. Seeking differences between two levels of an independent variable

VII. Seeking differences between more than two levels of an independent variable (linked to Chapter 16)

VIII. Analysis of designs with more than one independent variable

XIV. Evaluation of measures: item and discriminative analysis, and accuracy of tests

David Clark-Carter is Emeritus Professor at Staffordshire University and Consultant Editor of the British Journal of Mathematical and Statistical Psychology. In 2016 he was awarded the lifetime achievement award by the Education and Public Engagement Board of the British Psychological Society.

'Clark-Carter has done an excellent job in updating this much-used textbook. The book should be an essential part of a university student’s reading at undergraduate level and a much-needed reference book at postgraduate level.

'The book provides a step-by-step guide to research that students and researchers will find extremely useful. This fourth edition provides consistently outstanding coverage of the core principles of psychological research. An informative and reader-friendly book.'