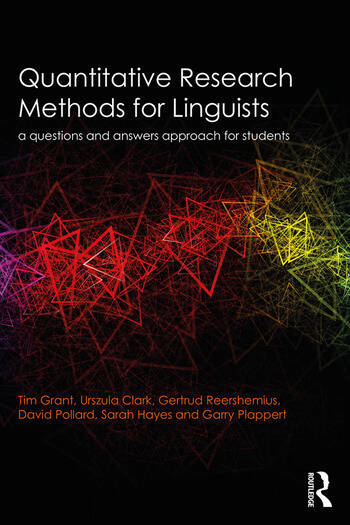 Quantitative Research Methods for Linguists: a questions and answers approach for students

provides an accessible introduction to research methods for undergraduates undertaking research for the first time. Employing a task-based approach, the authors demonstrate key methods through a series of worked examples, allowing students to take a learn-by-doing approach and making quantitative methods less daunting for the novice researcher.

is essential reading for all students undertaking degrees in linguistics and English language studies.

1. Basic concepts of quantification and number

3. Survey of the sexiness of Klingon

4. Who speaks Low German with their children?

5. Frequency of use of the present perfect tense in two newspapers
Comparison of two groups where the data is not normally distributed – Mann Whitney U test

6. Is there a difference in the way ‘ing’ is pronounced by people from Birmingham and the Black Country?
Testing for difference using Chi square

7. Do letter writers tend to use nouns and verbs together?
Scatterplots and correlation of linear data

8. Does the use of pronouns differ between two academic disciplines?
Using T-test to compare between two groups

is Professor of English Language and Linguistics at Aston University, UK.

is the 50th Anniversary Chair in Language Contact and Linguistics at Aston University, UK.

is Learning and Teaching Support Manager at Aston University, UK.

is Senior Lecturer in Technology Enhanced and Flexible Learning at Aston University, UK

is a lecturer in the Department of English at Aston University, UK.

"This is an ideal text for Linguistics undergraduates needing guidance on quantitative methods. It features step-by-step guides, engagingly grounded in real-world case studies. Especially helpful is the focus on linguistic research contexts, with discussion of appropriate tests and approaches for each one. Students will find this book a useful and accessible reference."