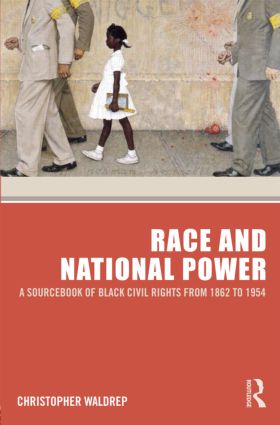 In American history, students are taught about the three branches of government. Most of the time is spent learning about the Executive and the Legislative bodies, but the Judicial branch has had a monumental effect on the course of American history, and nowhere is this more apparent than in the area of civil rights.

Race and National Power: A Sourcebook of Black Civil Rights from 1862 to 1954

gathers together a collection of primary documents on the history of law and civil rights, specifically in regard to race. The sources covered include key Supreme Court decisions, some opinions from other courts as well, and texts written by ordinary people – the victims and perpetrators of racism and the lawmakers who wrote the statutes the courts must interpret.

With helpful headnotes and introductions, Race and National Power: A Sourcebook of Black Civil Rights from 1862 to 1954 is the perfect resource for anyone studying legal history or race in America.

"Race and National Power assembles a variety of sources to compose a complex portrait of the US legal and political landscape over a period of almost one hundred years. Thorough research and skillful comments render this the best sourcebook on race and law. It is at the same time a rich collection of documents on US politics. Anyone writing on race, law, and politics in the United States has to read this book."

"Christopher Waldrep has produced a fascinating and highly useful sourcebook for anyone interested in American history. The rich documents in the volume capture the plethora of views and voices that weighed in on these debates—everyone from black victims of white violence, to newspaper editors, to Supreme Court justices. Waldrep’s expert and informative commentary, along with the documents themselves, reveal the complexity of constructing, deconstructing, and reconstructing federal power in the service of racial equality."

"Waldrep presents a deep and rich array of primary documents and provides insightful analysis which grounds and contextualizes them. This moving and accessible book, which takes us from the Civil War through Brown, should quickly become an indispensible teaching tool for a multitude of undergraduate and law school classes."

"In Race and National Power Christopher Waldrep plunges into the depths of American race relations history to retrieve both standard and little-remembered or often overlooked archival evidence of the unmistakable architecture of legalized (and extralegal) white racism, black subordination, and the near century-long political battle to end both through the rule of law. In an era of colorblind jurisprudence and racial retrenchment, Race and National Power offers a fresh reminder that the Supreme Court, as much as any other branch of government, is implicated in the legacies of white supremacy and black subordination, and how much remains to be done to heal the wounds of American constitutional history."

–Robert Westley, Professor of Law, Tulane Law School, author of Many Billions Gone: Is It Time to Reconsider the Case for Black Reparations?

"Unlike many such collections, Waldrep’s book has a definite theme. Employing documents from shortly before the Civil War to about the time of Brown v. Board of Education, he traces the link between the cause of civil rights and the power of the national government. … There is plenty of interesting material in Race and National Power. … [I]t should be in the collection of every university library. It is also a valuable tool for scholars and teachers to have on hand. Even more it would be a wonderful supplement for both undergraduate and graduate courses in history and political science."

Part I: The Civil War Origins of Civil Rights

Chapter 9: President Hayes and the End of Reconstruction

Chapter 20: Using the Law against Racism

Chapter 21: The Age of Theodore Roosevelt

Chapter 24: America as an "Enormous Community"

Chapter 25: The Art and Practice of Mobilizing Public Opinion: Gandhi

Chapter 28: The NAACP Lobbies for a Law against Lynching

Chapter 30: Struggle and Conflict are Present in All Phases of Life

Christopher Waldrep is Jamie and Phyllis Pasker Chair of American History at San Francisco State University. He is author of Lynching in America: A History in Documents.