Race and the Origins of American Neoliberalism 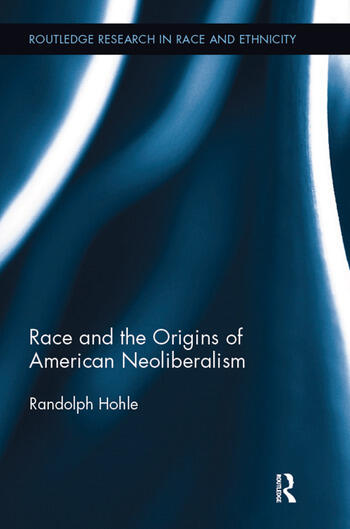 Race and the Origins of American Neoliberalism

Why did the United States forsake its support for public works projects, public schools, public spaces, and high corporate taxes for the neoliberal project that uses the state to benefit businesses at the expense of citizens? The short answer to this question is race. This book argues that the white response to the black civil rights movement in the 1950s, '60s, and early '70s inadvertently created the conditions for emergence of American neoliberalism. Neoliberalism is the result of an unlikely alliance of an elite liberal business class and local segregationists that sought to preserve white privilege in the civil rights era. The white response drew from a language of neoliberalism, as they turned inward to redefine what it meant to be a good white citizen. The language of neoliberalism depoliticized class tensions by getting whites to identify as white first, and as part of a social class second. This book explores the four pillars of neoliberal policy, austerity, privatization, deregulation, and tax cuts, and explains how race created the pretext for the activation of neoliberal policy. Neoliberalism is not about free markets. It is about controlling the state to protect elite white economic privileges.

1. Introduction  2. "The American Viewpoint with a Southern Accent": The Language of Neoliberalism  Part 1: Taxes and Regulations  3. Business Subsidies and Regressive Taxation: Economic Development in Mississippi  4. The Shifting Economic Paradigm: Tax Credits and Road Building in Alabama  5. Neoliberal Urbanization: Race, Zoning, and Tax Revolts  Part 2: Fiscal Austerity and Privatization  6. Privatization and School Desegregation in Alabama  7. Austerity and Total Control over Mississippi’s School System  8. The Diffusion of Neoliberalism from the South to the North: Schools and "Forced Busing."  Conclusion: Resiliency and Resistance in the Neoliberal Era.  Appendix 1

Randolph Hohle is currently an Assistant Professor of Sociology at SUNY Fredonia.

'Race and the Origins of American Neoliberalism offers a critically in-depth and race-based rebuttal to popular class theories of Neoliberalism. Hohle provides a fascinating analysis of the language of neoliberalism and the synergy of race, austerity, privatization, deregulation, and tax cuts. His work deconstructs how neoliberalism was and continues to function as a racial project and how any academic critiques or movements against neoliberalism require us to “rethink what constitutes white privilege in the neoliberal era”.'

"Race and the Origins of American Neoliberalism ultimately raises important questions about what truly defines the era of neoliberalism. If neoliberalism is a bundle of economic and social policies, then Hohle’s analysis forces us to recognize that the pretext of contemporary neoliberal-ism emerged rather haphazardly and far earlier than originally assumed. More importantly, the book demonstrates the ways that neoliberal policies were designed and employed to purposefully lock African Americans out of processes of economic development and growth, thus protecting white economic privilege."

"The book represents a synthesis of how racial dynamics shaped the modern development of America’s eco-nomic foundations and political institutions, and it suggests a growing convergence among fiscal regimes of the South and else-where... Making unexpected connections and tracing an understudied genealogy, Hohle adds layers of theoretical complexity and empirical richness to what we think we know about race and neoliberalism within the American context. Agree or disagree, the provocative argument demands serious engagement and will certainly generate debate as well as inform new directions of research."