Race for the Reichstag
The 1945 Battle for Berlin 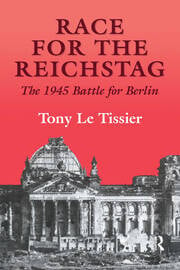 Race for the Reichstag: The 1945 Battle for Berlin

The soldiers of the Red Army identified the Reichstag as the victor's prize to be taken in Berlin. This account of the battle lays the many myths created by Soviet propaganda after the event to rest and details what exactly happened as the Red Army and the Allies raced to be the first at the Reichstag.

Bulletin of the Military Historical Society, No 199, Feb 2000

"The story is very well researched from German and Soviet records, laying many of the Soviet propaganda myths. A famous battle now well recorded using the latest research material available."

Stone and Stone Second World War Books, on the Internet at http://www.sonic.net/~bstone/bookinfo.html

"The original was the best English-language book about the Soviet capture of Berlin in 1945, and the new edition is even better ... Good maps, interesting photos, excellent OBs for both sides ... While some of the tactical minutiae might be missing, this is a potent book and the revised edition remains the best account of the fighting in Berlin at the end of the war in Europe. Highly recommended."

Choice- " Using Soviet records as well as numerous German archival and memoir sources, Le Tissier has written a vivid account of the final battle of WW II in Europe. His book deserves to be in all WW II collections.