Racial Formation in the United States 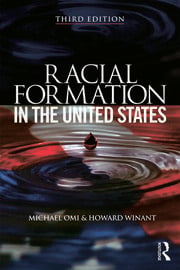 Racial Formation in the United States

Twenty years since the publication of the Second Edition and more than thirty years since the publication of the original book, Racial Formation in the United States now arrives with each chapter radically revised and rewritten by authors Michael Omi and Howard Winant, but the overall purpose and vision of this classic remains the same: Omi and Winant provide an account of how concepts of race are created and transformed, how they become the focus of political conflict, and how they come to shape and permeate both identities and institutions. The steady journey of the U.S. toward a majority nonwhite population, the ongoing evisceration of the political legacy of the early post-World War II civil rights movement, the initiation of the ‘war on terror’ with its attendant Islamophobia, the rise of a mass immigrants rights movement, the formulation of race/class/gender ‘intersectionality’ theories, and the election and reelection of a black President of the United States are some of the many new racial conditions Racial Formation now covers.

Michael Omi is Associate Professor of Ethnic Studies and Associate Director of the Haas Institute for a Fair and Inclusive Society at the University of California, Berkeley.

Omi and Winant have revised their classic book to foreground a new understanding of race as a master category and to present new arguments about the importance of social movements. A great book is now even better!

In keeping with the foundational idea that race is formed and re-formed in different eras, locations, and situations, Omi and Winant have substantially revised their classic treatise on the subject to better address the "racial formation" of the early 21st century.  From realms as far apart as claims of neuro-imaging hard-wired racism to a fierce critique of post-racial ideologies, the authors have successfully taken on the immensely challenging task of explaining how these recent developments fit into ever-morphing structures of racial domination.  In so doing, this new edition sustains the book’s stature as an enduring contribution to theories of social stratification.

This book retains all of the vitality of its initial edition. It is an important work that will solidify the authors’ well deserved reputations.

Michael Omi and Howard Winant have substantially revised their classic work Racial Formation in the United States for the ‘post-Obama’ age. They argue in compelling detail that civil rights organizing ignited the 1960s insurgencies among women and sexual minorities, and they conclude that the central recognition of identity politics – that ‘the personal is political’ – has been ‘the single most enduring contribution of the anti-racist movement.’ Omi and Winant deftly engage with recent critical writings on neoliberalism, on the body, on intersectionality, and on the relationship between structural racism and racial identity as experienced in daily life. At the same time, they retain their jargon-free, accessible writing style, adding new historical and theoretical syntheses that will make this an ideal text for undergraduate courses in race, ethnicity, history, political theory, and democracy in America. There are many new intellectual riches in this third edition. Racial Formation in the United States is an indispensable book for understanding how race persists in an ostensibly ‘post-racial’ nation."

Michael Omi and Howard Winant’s Racial Formation in the United States is a landmark contribution to our understanding of the way race is created, transformed, and permeates every aspect of our daily lives. There is no other scholarly work on racial formation that has had a wider and more lasting impact on various academic fields than this canonical book. The publication of its third edition promises to extend its scholarly impact to new heights. It has fundamentally changed the way we understand race and racism in the United States.