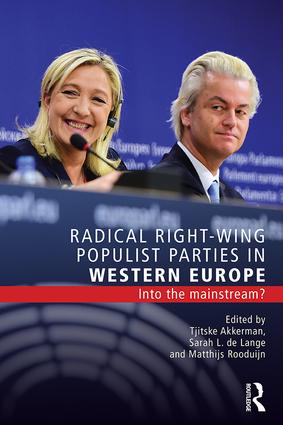 Into the Mainstream?, 1st Edition

Are these developments the cause and/or consequence of the mainstreaming of radical right-wing populist parties? Have radical right-wing populist parties expanded their issue profiles, moderated their policy positions, toned down their anti-establishment rhetoric and shed their extreme right reputations to attract more voters and/or become coalition partners? This timely book answers these questions on the basis of both comparative research and a wide range of case studies, covering Austria, Belgium, Denmark, Finland, France, the Netherlands, Norway, Switzerland, and the United Kingdom.

Analysing the extent to which radical right-wing populist parties have become part of mainstream politics, as well as the factors and conditions which facilitate this trend, this book is essential reading for students and scholars working in European politics, in addition to anyone interested in party politics and current affairs more generally.

The book accomplishes a great fact-finding mission describing the consequences of right-wing populists in government for party competition. It begins the hunt for theory and finds new puzzles: The effects of radical right-wing government involvement are more complicated than anticipated. The book is an indispensable building block for any scholar dealing with this subject.

In 2000 Hainsworth et al. noted that the extreme right was moving "from the margins to the mainstream." Fifteen years later, in a long-overdue but worthy 'successor' to Hainsworth's seminal volume, Akkerman et al. observe that radical right-wing populist parties have now solidly moved "into the mainstream".

This book offers an updated and in depth analysis of case studies of right-wing populism and extremism, alongside the validation of a crucial hypothesis: have these parties conquered more of the political space of the moderate mainstream right? Thanks to an empirically grounded comparative survey examining the phenomenon, the authors demonstrate that, contrary to shared wisdom, the populist far right is still secure in its extreme position, and remains quite distant from other mainstream parties all over Europe. Moreover, underlining the fact that the gap between extreme and mainstream parties has only been narrowed where a critique of the European Union is concerned, the authors offer further hints to the sensitive topic of euro-scepticism.

1. Introduction. Inclusion and mainstreaming: Radical right-wing populist parties in the new millennium Tjitske Akkerman, Sarah L. de Lange and Matthijs Rooduijn Part I. Comparative analyses 2. Into the mainstream? A comparative analysis of the programmatic profiles of radical right-wing populist parties in Western Europe over time Tjitske Akkerman, Sarah L. de Lange and Matthijs Rooduijn 3. Closing the gap? A comparison of voters for radical right-wing populist parties and mainstream parties over time Matthijs Rooduijn Part II. Case-studies 4. The mainstreaming of the Austrian Freedom Party: The more things change… Reinhard Heinisch and Kristina Hauser 5. The Danish People’s Party: Combining cooperation and radical positions Flemming Juul Christiansen 6. From the mainstream to the margin? The radicalisation of the True Finns Ann-Cathrine Jungar 7. The Party for Freedom: Balancing between mission, votes and office Tjitske Akkerman 8. The taming of the shrew. How the Progress Party (almost) became part of the mainstream Anders Ravik Jupskås 9. Staying away from the mainstream. The case of the Swiss People’s Party Oscar Mazzoleni 10. It is still a long way from Madou Square to Law Street. The evolution of the Flemish Bloc. Paul Lucardie, Tjitske Akkerman and Teun Pauwels 11. A new course for the French radical right? The Front National and ‘de-demonisation’ Gilles Ivaldi 12. The UK Independence Party: The dimensions of mainstreaming Simon Usherwood 13. Conclusions Tjitske Akkerman 14. Appendix 1 15. Appendix 2

Tjitske Akkerman is Assistant Professor in the Department of Political Science at the University of Amsterdam, the Netherlands.

Sarah L. de Lange is Associate Professor in the Department of Political Science at the University of Amsterdam, the Netherlands.

is a postdoctoral researcher and lecturer in the Department of Political Science at the University of Amsterdam, the Netherlands.