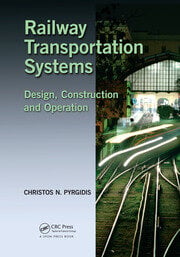 Incorporates More Than 25 Years of Research and Experience

Railway Transportation Systems: Design, Construction and Operation presents a comprehensive overview of railway passenger and freight transport systems, from design through to construction and operation. It covers the range of railway passenger systems, from conventional and high speed inter-urban systems through to suburban, regional and urban ones. Moreover, it thoroughly covers freight railway systems transporting conventional loads, heavy loads and dangerous goods. For each system it provides a definition, a brief overview of its evolution and examples of good practice, the main design, construction and operational characteristics, the preconditions for its selection, and the steps required to check the feasibility of its implementation.

Developed for Engineers, Designers, and Operators of Railway Systems

The book also provides a general overview of issues related to safety, interface with the environment, cutting-edge technologies, and finally the techniques that govern the stability and guidance of railway vehicles on track.

suits students, and also those in the industry ‒ engineers, consultants, manufacturers, transport company executives ‒ who need some breadth of knowledge to guide them over the course of their careers.

Christos N. Pyrgidis is a professor in railway engineering for the civil engineering department at Aristotle University of Thessaloniki (AUTh), Greece. He earned a diploma in civil engineering (AUTh, 1981). In addition, he specialized for five years at the Ecole Nationale des Ponts et Chaussées (ENPC) Paris, France, in transportation infrastructure (1984–1985: CES ‘Infrastructure et Transports’); transport economics (1985–1986: DEA ‘transport’) and railway engineering (1986–1989: PhD in ‘transport’). From 2004 to 2007 he was the Greek representative to the Administrative Board of the European Railway Agency (ERA). Pyrgidis is a member of the ERRAC Academia Permanent Advisory Group and member of the Scientific Committee of SHIFT2RAIL Joint Undertaking (S2R JU). He has published more than 100 articles in scientific journals and international congresses. He is the author of another book, which is entitled Railway Transportation Systems: Infrastructure, Rolling Stock, Exploitation (in Greek).

"… an excellent reference source that can be used for all aspects of rail systems research. It is a useful addition to any rail researcher’s book shelf."
—Professor Mark Robinson, NewRail, Newcastle University, UK

"This book is thoroughly researched and clearly presented with lots of helpful and well-illustrated examples. …a very useful resource for railway engineers and anyone needing information on railway systems from around the world."
—Professor Simon Iwnicki, Institute of Railway Research, University of Huddersfield, UK

"… presents railway transportation system[s] in a simple and logical way. The book’s layout and structure makes it easier to understand and follow... A quick look over the content also indicates that it will be a useful reference to researchers especially coming from non-railway discipline[s] to perform research in railway."
—Uday Kumar, Luleå Railway Research Center, Luleå University of Technology, Sweden

"… this 475-page book is intended to provide a comprehensive overview of all engineering aspects of passenger and freight transport by rail."
—Railway Gazette International