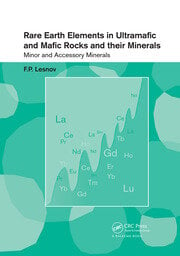 Rare Earth Elements in Ultramafic and Mafic Rocks and their Minerals: Minor and Accessory Minerals

This book presents an extensive overview of literature published globally in the last decades on REE distribution in minor and accessory minerals from various types of ultramafic, mafic, and other plutonic rocks. It is a continuation of the author’s work published in 2010: Rare Earth Elements in Ultramafic and Mafic Rocks and their Minerals. Main Types of Rocks. Rock-Forming Minerals.

The analytical database created includes over 900 analyses of minerals, including garnets (341), chrome-spinels (38), ilmenites (160), zircons (210), apatites (62), titanites (51), perovskites (46) and micas (35). The book offers a brief historical background on REE distribution for each of the minerals and analytical methods for their determination; further, the main features of concentration of these impurities in the samples of different rocks and their manifestations are described and the regularities of REE distribution between coexisting phases, including parent melts, systematized available estimates of distribution coefficients are considered. REE isomorphism in these minerals is discussed as well as the possibilities of using data on REE distribution as typomorphic signs of determining the crystallization conditions of minerals. The numerous analyses of REE presented in this book can be used as reference data. Finally, there is an additional chapter on a new problem: the study of geochemical relations between REE and platinum group elements.

As an overview of modern data on the geochemistry of REE in minor and accessory minerals from rocks of mafic-ultramafic complexes and as a reference book, this work will be of interest to a wide range of specialists studying petrology and geochemistry of products of ultramafic and mafic magmatism, including ore mineralization, as well as for graduate and undergraduate university students in geology departments.

Some general regularities of REE distribution in the minor and accessory minerals of ultramafic, mafic and some other rocks