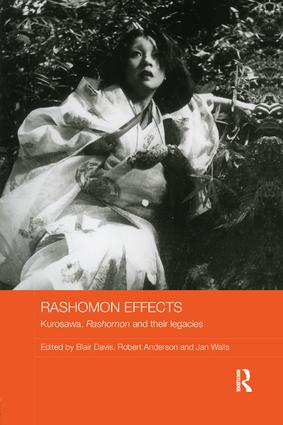 Akira Kurosawa is widely known as the director who opened up Japanese film to Western audiences, and following his death in 1998, a process of reflection has begun about his life’s work as a whole and its legacy to cinema. Kurosawa’s 1950 film Rashomon has become one of the best-known Japanese films ever made, and continues to be discussed and imitated more than 60 years after its first screening.

This book examines the cultural and aesthetic impacts of Akira Kurosawa’s Rashomon, as well as the director’s larger legacies to cinema, its global audiences and beyond. It demonstrates that these legacies are manifold: not only cinematic and artistic, but also cultural and cognitive. The book moves from an examination of one filmmaker and his immediate social context in Japan, and goes on to explore how an artist’s ideas might transcend their cultural origins to ultimately provide global influences. Discussing how Rashomon’s effects began to multiply with the film being re-imagined and repurposed in numerous media forms in the decades that followed its initial release, the book also shows that the film and its ideas have been applied to a wider range of social and cultural phenomena in a variety of institutional contexts. It addresses issues beyond the realm of Rashomon within film studies, extending to the Rashomon effect, which itself has become a widely recognized English term referring to the significantly different interpretations of different eyewitnesses to the same dramatic event.

As the first book on Rashomon since Donald Richie's 1987 anthology, it will be invaluable to students and scholars of film studies, film history, Japanese cinema and communication studies. It will also resonate more broadly with those interested in Japanese culture and society, anthropology and philosophy.

Blair Davis is an Assistant Professor of Media and Cinema Studies in the College of Communication at DePaul University in Chicago, USA.

is Professor of Communication at Simon Fraser University in Vancouver, Canada.

is a Professor Emeritus in the Humanities Department at Simon Fraser University, Canada.