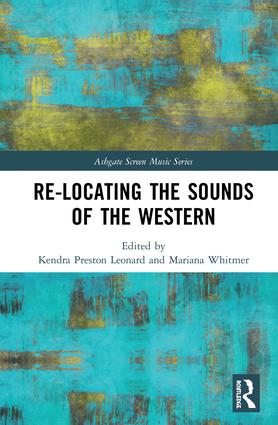 Re-Locating the Sounds of the Western

Re-Locating the Sounds of the Western examines the use and function of musical tropes and gestures traditionally associated with the American Western in new and different contexts ranging from Elizabethan theater, contemporary drama, space opera and science fiction, Cold War era European filmmaking, and advertising. Each chapter focuses on a notable use of Western musical tropes, textures, instrumentation, form, and harmonic language, delving into the resonance of the music of the Western to cite bravura, machismo, colonisation, violence, gender roles and essentialism, exploration, and other concepts.

1. "The Wild West meets the Wives of Windsor: Shakespeare and Music in the Mythological American West" (Kendra Preston Leonard) 2. "The Commodification of the Western Soundscape" (Mariana Whitmer) 3. "High-senberg Noon: Breaking Bad and the Sounds of the West" (Jeffrey Bullins) 4. "Reinterpreting the American Western in Ry Cooder’s Soundtrack to Paris, Texas (1984)" (Erin Bauer) 5."Sonic Markers of the Science Fiction Western" (S. Andrew Granade) 6. "'You Can’t Build an Empire Without Getting a Mite Unscrupulous': Music, Morality, and Cold War Criticism in Doctor Who’s ‘The Gunfighters’ (1966)" (Stanley C. Pelkey II) 7. "From the Old West to the New Future: Stoney Burke, The Outer Limits, and the Daystar Stock Music Library" (Reba A. Wissner) 8. "The Soundscape of the East German Indianerfilme" (Johanna Frances Yunker)

Kendra Preston Leonard is a musicologist and music theorist whose work focuses on women and music in the twentieth and twenty-first centuries and music and adaptations of Shakespeare. She is the author of five scholarly books and numerous book chapters and articles. Her work has appeared in Borrowers and Lenders, Cerae, The Journal of Historical Biography, The Journal of Musicological Research, and Current Musicology, among other journals and collections. She is the winner of many scholarly awards and prizes, including the 2017–2018 Rudolph Ganz Long-Term Fellowship at the Newberry Library. She is the Director of the Silent Film Sound and Music Archive.

Mariana Whitmer is Executive Director of the Society for American Music and adjunct faculty at West Virginia University and the University of Pittsburgh. She has published widely on music in the silent and classic Western, including Film Score Guides for Jerome Moross’s The Big Country (2012) and Elmer Bernstein’s The Magnificent Seven (2017). Her current book projects continue to focus on studies of classic Western film scores, including Scoring the Plains: Music in the Classic Hollywood Western and Dissonance Intended: the Western Film Scores of Max Steiner.

The recent proliferation of research about music for film, television, video games, and the Internet—collectively called "screen music"—has resulted in a growing, diverse body of scholarly work that cuts across disciplinary divides, temporal partitions, and geographical boundaries. These studies nevertheless share a common dedication to advancing our understanding of how music interacts with moving images: supporting narrative, creating affect, suspending disbelief, and engaging audiences. The Ashgate Screen Music series dedicates itself to publishing such monographs and edited collections, which reflect the variety of topics and approaches adopted in current screen music scholarship while addressing specific encounters between music and moving images, regardless of medium, genre, time, or place. Our authors rely upon both ear and eye in coming to terms with the social, cultural, and historical meanings embedded within the audiovisual text. While maintaining the highest academic standards of peer-reviewed publication, series volumes also strive to speak to inquisitive readers in general, who wish to inform themselves about the subject under investigation. We hope that our readership will find the individual volumes in the Ashgate Screen Music series rewarding in and of themselves, and exemplary of how the varied themes and methods in screen music research of today can meaningfully and profitably intersect across increasingly porous boundaries.