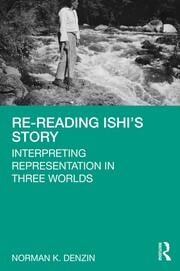 Re-Reading Ishi's Story offers a manifesto of sorts through a critical reading of an anthropological classic, Theodora Kroeber’s 1961 book, Ishi in Two Worlds: A Biography Of The Last Wild Indian In North America.

The heart of the analysis involves a five-play cycle, built around Gerald Vizenor’s Trickster-survivance model. It gives Ishi a voice he never had in Kroeber’s book and imagines an Ishi who was not the happy warrior in Kroeber’s book.  The author follows the storyline line in Kroeber’s book, focusing on key events as recounted by Alfred Kroeber, and his associates Saxton Pope and Thomas Waterman. Chapter 1 tells Ishi’s story in his own words; chapter 2 re-tells Ishi’s capture narrative which includes the recording of his story of the Wood Ducks; chapter 3 builds on stories told about Ishi by Zumvald Jr.; chapter 4 criticizes Kroeber and associates for making Ishi return to his homeland, asking him to ‘play’ Indian; and chapter 5 takes up his death and the recovery of his brain. The concluding chapters address repatriation practices, genocide, indigenous ethics, discourses of forgiveness, and a performance autoethnography ethic for this new century, returning to the Kroebers and their autoethnographic practices.

This book continues a four-volume project on native Americans, the postmodern wild west shows, museums, violence, genocide, and the modern US American use of the Native American in a collective search for an authentic identity (Denzin, 2015, 2013, 2011, 2008). It will be of great interest to scholars and students of qualitative inquiry, anthropology and Native American Studies.

Part One Chapter 1. You Can Call Me Ishi: The Story of a Trickster Chapter 2. Ishi and the Wood Ducks, Part 2, or Ishi, the Assimilated Indian Chapter 3. Ishi the Happy Warrior in Golden Gate Park Chapter 4. Ishi in the Wilderness: Anatomy of a Life and a Death (1861-1916) Chapter 5. Ishi’s Brain: The Trickster’s Revenge; Part Two Chapter 6. Ishi’s Ethics Chapter 7. Ishi Comes Home