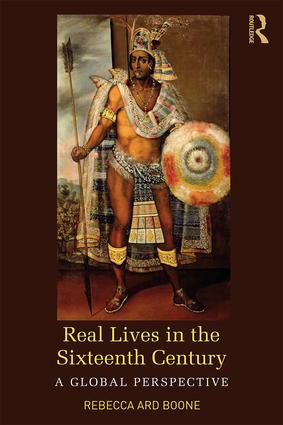 Real Lives in the Sixteenth Century

Real Lives in the Sixteenth Century presents a global history using four sets of biographies to illustrate similar situations in different geographical regions. The vibrant narratives span four continents and include the following pairs: Henry IV of France and Hideyoshi of Japan, Hürrem Sultan (Roxelana) of the Ottoman Empire and Lady Zheng of the Ming Dynasty, Afonso I of Kongo and Elizabeth I of England, and Pope Clement VII and Moctezuma II of Mexico.

Through exploring the lives of eight individuals from a variety of cultural settings, this book encourages students to think about the ‘big questions’ surrounding human interactions and the dynamics of power. It introduces them to a number of key historical concepts such as feudalism, dynasticism, religious syncretism and slavery, and is a springboard into the history of the wider world, blending together aspects of political, cultural, intellectual and material history.

Accessibly written and containing timelines, genealogical tables and a number of illustrations for each biography, Real Lives in the Sixteenth Century is the ideal introductory text for undergraduates of pre-modern World History and of the sixteenth century in particular.

'This book will capture the imagination of students and immerse them in the early modern world. Readers will come to see the sixteenth century in its most exciting light: bloody, plotting, romantic, dramatic, shocking. Rebecca Ard Boone has a knack for storytelling and for finding the vivid details. With these paired biographies, she has brought to life the major themes that defined the century.'

1. Set I: Hideyoshi and Henry IV of France

3. Set III: Afonso I of Kongo and Elizabeth I of England

Rebecca Ard Boone is Professor of History at Lamar University, USA. Her previous publications include War, Domination, and the Monarchy of France (2007) and Mercurino di Gattinara and the Creation of the Spanish Empire (2014).

This series will present five books designed to introduce first year university students to global history from 1500 to the present. Conceived as a supplement to the traditional textbook, the series aims to encourage effective teaching by embedding historical information within compelling biographies. The books will juxtapose figures facing similar situations in different geographical regions, with one book for each century, each containing four sets of biographies.

The purpose of this series is to teach key social, economic, political, and cultural developments in world history using biography as a framework to anchor the student. Books in the series will address themes appropriate to each century including the connections, circulations, and interactions of an increasingly connected world. Each book will include individuals selected to complement and illustrate the overall theme of the volume and large-scale historical developments. Seeking balance in terms of gender, spheres of life, and geographic diversity, the books will feature people in different social situations engaged in a variety of activities. Instead of providing a serial history of one civilization after another, the chapters will include a number of actors in transit between locations and cultures and cover important trade-networks, oceans, frontiers, borderlands, and diasporas.