Real Space
The fate of physical presence in the digital age, on and off planet 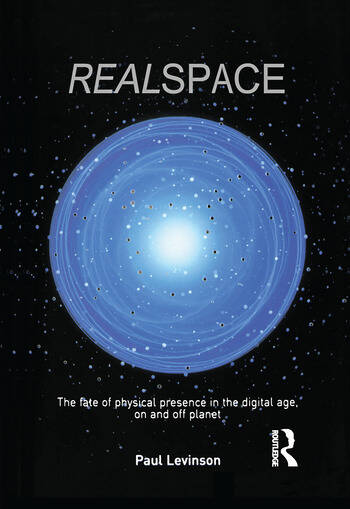 Real Space: The fate of physical presence in the digital age, on and off planet

Is planet earth the end of the line, or is space itself the next stop?
Cyberspace. It's incredible, taking us to any part of the planet we want to visit. But as Paul Levinson shows in his brilliant new book, when it comes to transport, we're still stuck in the past, preferring to take our bodies with us. Whether it's trains, yachts, scooters or pogo-sticks, we're compelled to keep moving, our movements curtailed only by the earth itself. In our imaginations however, we soar way past the limits of current technology.

With a lucid but reflective style that takes in everything from robots and science fiction to religion and philosophy, Paul Levinson asks why there is a deep seated human desire to know what's 'out there'. Why, after getting a man on the moon, did the US space program develop so slowly? In a world where space is constantly repackaged, how do we know what real space is? Is our desire to get into space natural, or a religious craving, and is it a modern phenomenon, or did our ancestors also dream of escaping the clutches of Mother Earth?

Jam-packed with exciting, innovative, even revolutionary thinking about our future, Realspace is essential reading for everyone who has ever sat at their desk, gazed into the distance and imagined boarding a space shuttle...

1: Bicycling into Outer Space: The Limits of Cyberspace, The Lure of Outer Space, What Went Wrong in Outer Space?, Space Re-Packaged, Robots and Missed Golden Opportunities 2: Talking and Walking: The Reason They Rhyme, The Biological Antiquity of the Coupling, Human Roads, Rail Roads, Out of the Box, Impulse Power and Partners, Global Villages, The Beginnings of Space Travel and Cyberspace 3: Breaking Out of Windows and Cyberspace The Appeal of Interaction, The Medium of Media and the Real World, Two Kinds of Java in the World, Ecologies of Transport and Communication 4: The Cellphone as Antidote to the Internet Dissolving What Glues Us to the Screen, Talk Again Leads the Way to Walking, on Earth 5: The Only Way Forward from California is Up: What's Keeping Us Down? Realpolitik versus Realspace, The Entropy of Details and Science Fiction, Philosophy versus Science 6: Further from Home, Closer to Truth Mirrors: Pitfalls and Opportunities, Telescopes into Microscopes, Apartment, City, Universe 7: Is Democracy the Best Launchpad to Space? War and Peace, Application and Invention, Microsoft Space?, Democracy's Partners 8: Old-Time Religion as a New Wing to Space Conquistadors to the Stars?, Coinciding Heavens, How Would Religion Make Its Contribution?, Playful Space, 9: Would You Want To Live Near a Star Named HD 209458? Old Names for New Worlds, Spacefaring Metaphors, The Comforts of Home in Space 10: Real Robots Don't Cry Robotic Merits, Limitations of Programming, Knowledge in Tiers and Tears, Robots with Emotions? 11: Realspace in an Age of Terrorism Two-Edged Swords of Communication, Anthrax and E-Mail, Planes and Rockets: Reversal of Symbols?, Starport at the World Trade Center, A Last Word About Images, Reality, and Opportunity

Paul Levinson's The Soft Edge (1997) and Digital McLuhan (1999) have been the subject of major articles in The New York Times and Wired and have been translated into Chinese, Japanese, and six other languages. Digital McLuhan won the Lewis Mumford Award for Outstanding Scholarship, and Levinson's science fiction novel The Silk Code won the 2000 Locus Award for Best First Novel. Additional science fiction novels include Borrowed Tides (2001) and The Consciousness Plague (2002). He has appeared on 'Inside Edition', CNN, The History Channel, CSPAN, Fox News, NPR, the BBC, and the CBC. He was President of Science Fiction and Fantasy Writers of America, 1998-2001, and is Professor and Chair of Communication and Media Studies at Fordham University in New York City.

"...engagingly humane and commonsensical." - Albert Borgmann, author of Holding on to Reality: The Nature of Information at the Turn of the Millennium

"...a lucid argument for injecting new passion into the exploration of outer space.He is one of our very best writers on technology because he presents the big picture." - Michael Heim, author of The Metaphysics of Virtual Reality