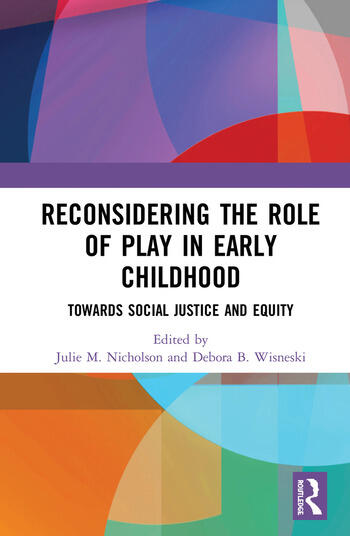 Reconsidering The Role of Play in Early Childhood: Towards Social Justice and Equity

Reconsidering the Role of Play in Early Childhood: Towards Social Justice and Equity—a compilation of current play research in early childhood education and care—challenges, disrupts, and reexamines conventional perspectives on play. By highlighting powerful and provocative studies from around the world that attend to the complexities and diverse contexts of children’s play, the issues of social justice and equity related to play are made visible. This body of work is framed by the phenomenological viewpoint that presumes equity is best confronted and improved through developing an expanded understanding of play in its multiple variations and dimensions. The play studies explore the potential and troubles of play in teaching and learning, children’s agency in play, the actual spaces where children play, and different perspectives of play based on identity and culture. The editors invite readers to use the research as an inspiration to reconsider their conceptions of play and to take action to work for a world where all children have access to play.

This book was originally published as a special issue of Early Child Development and Care.

Foreword: Is play a privilege or a right? And what’s our responsibility? On the role of play for equity in early childhood education Mariana Souto-Manning

Part I: Potential and troubles of play in teaching and learning

4. The relative emphasis of play rules between experienced and trainee caregivers of toddlers Kinga Gyöngy

8. Where is my stuff? Conceptualizing Hip Hop as ‘play’ Anthony Broughton

9. They’re lovin’ it: how preschool children mediated their funds of knowledge into dramatic play Anne Karabon

11. Rethinking young children’s digital game play outside of the home as a means of coping with modern life Youn Jung Huh

13. Where do the children play?: An investigation of the intersection of nature, early childhood education and play Jeanne M. Brown and Candace Kaye

15. ‘They get enough of play at home’: a Bakhtinian interpretation of the dialogic space of public school preschool Jamie Huff Sisson and Janice Kroeger

Julie Nicholson is Associate Professor of Practice at Mills College, Oakland, USA and the Director of the Center for Play Research. She is also the Deputy Director for WestEd’s Center for Child and Family Studies.

Wisneski is the John T. Langan Community Chair in Early Childhood Education at the University of Nebraska Omaha, USA and the Director of the Early Childhood Inclusive Program.