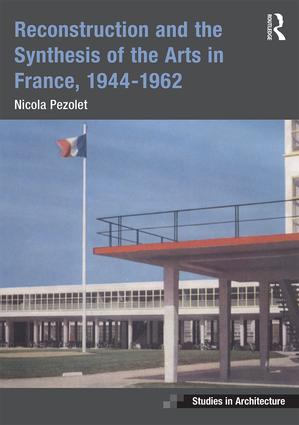 Reconstruction and the Synthesis of the Arts in France, 1944–1962

Reconstruction and the Synthesis of the Arts in France, 1944–1962

considers the artistic, architectural and bureaucratic shifts that emerged in the troubled aftermath of World War II and in the first years of the cold war. Focused on the modernist networks surrounding Le Corbusier, the Salon des Réalités Nouvelles, Groupe Espace, as well as on more radical, neo-avant-garde groups such as the Situationist International, this book casts new light on various artistic collaborations amid the French rebuilding efforts. It asks a series of critical questions: How did the synthesis of the arts discourse lead to a rethinking of the aesthetics of public space in postwar France? How did it participate in the physical reconstruction and modernization of French towns? How can we map the active, interdisciplinary cooperation between French artists, architects and designers on to the new economic challenges and the political unrest that emerged amid the Marshall Plan? Did French artists who called for a synthesis of modern art to architecture develop collaborative practices conducive to new forms of spectator engagement and public address? Finally, how was the avant-garde language of abstraction and polychromy re-envisioned in the context of advanced capitalism, and in what ways was it complicit with, or resistant to, various governmental, corporate and industrial projects?

. Experimental Desire: Asger Jorn and the Network of "Free Artists"

Nicola Pezolet received a PhD from the History, Theory and Criticism of Art and Architecture programme at MIT in 2013. He is currently Professor in the Art History Department at Concordia University in Montreal, Canada.