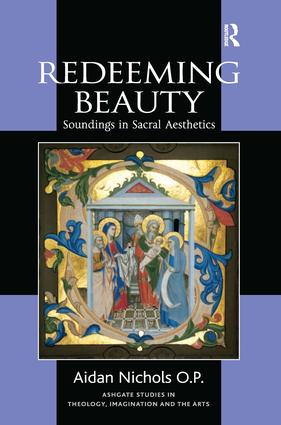 Redeeming Beauty explores the richness of orthodox Christian tradition, both Western and Eastern, in matters of 'sacral aesthetics' - a term used to denote the foundations, production and experience of religiously relevant beauty. Aidan Nichols investigates five principal themes: the foundation of beauty in the natural order through divine creative action; explicitly 'evangelical' beauty as a quality of biblical revelation and notably at its climax in Christ; the legitimacy of making and venerating artworks; qualities of the self in relation to objective presentation of the religiously beautiful; and the difficulties of practising a sacral aesthetic, whether as producer or consumer, in an epoch when the visual arts themselves have left behind not only Church but for the greater part the public as well. The thought of theologians such as Augustine, Aquinas, Balthasar, Ratzinger, Bulgakov, Maritain and others are explored.

’Nichols's essays raise many other questions that point, directly or indirectly, to the most significant issues in discussion in contemporary theological aesthetics. For this reason, as well as for its historical surveys, the book is of great value for scholars interested in the interrelationships between God, religion, beauty, and the arts.’ Logos: A Journal of Eastern Christian Studies ’Redeeming Beauty is a fine addition to a very welcome series… adds to the growing number of recent volumes that emphasize the importance of the visual arts for the disciplines of theology and biblical studies…’ Theology

Contents: Preface; Part 1 Foundations, in Creation and Grace: Aesthetics in Augustine and Aquinas; The origin and crisis of Christian art. Part 2 Twentieth Century Theologians of the Image: Hans Urs von Balthasar on art as redemptive beauty; Sergei Bulgakov on the art of the icon; Pope Benedict XVI on holy images. Part 3 The Difficulties of Practice: The French Dominicans and the journal L’Art Sacré; The English uses of Maritain’s aesthetics: Eric Gill and David Jones. Conclusion: Christ and the muses; Index of names.

Aidan Nichols O. P. is John Paul II Lecturer in Roman Catholic Theology in the University of Oxford, UK. He has also taught at the Pontifical University of St Thomas, Rome; St Mary’s College, Oscott; and Blackfriars Hall, Oxford. He has published some thirty books, and over seventy articles.

Routledge Studies in Theology, Imagination and the Arts

What have imagination and the arts to do with theology? For much of the modern era, the answer has been 'not much'. It is precisely this deficit that this series seeks to redress. For, whatever role they have or have not been granted in the theological disciplines, imagination and the arts are undeniably bound up with how we as human beings think, learn and communicate, engage with and respond to our physical and social environments and, in particular, our awareness and experience of that which transcends our own creatureliness. The arts are playing an increasingly significant role in the way people come to terms with the world; at the same time, artists of many disciplines are showing a willingness to engage with religious or theological themes. A spate of publications and courses in many educational institutions has already established this field as one of fast-growing concern. This series taps into a burgeoning intellectual concern on both sides of the Atlantic and beyond. The peculiar inter-disciplinarity of theology, and the growing interest in imagination and the arts in many different fields of human concern, afford the opportunity for a series that has its roots sunk in varied and diverse intellectual soils, while focused around a coherent theological question: How are imagination and the arts involved in the shaping and reshaping of our humanity as part of the creative and redemptive purposes of God, and what roles do they perform in the theological enterprise? Many projects within the series have particular links to the work of the Institute for Theology, Imagination and the Arts in the University of St Andrews, and to the Duke Initiatives in Theology and the Arts at Duke University.