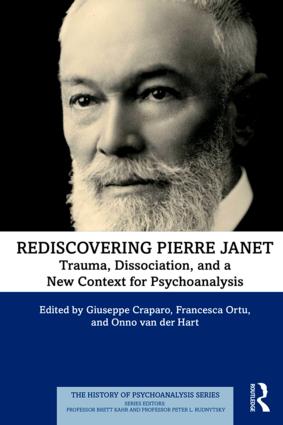 Trauma, Dissociation, and a New Context for Psychoanalysis, 1st Edition

Rediscovering Pierre Janet explores the legacy left by the pioneering French psychologist, philosopher and psychotherapist (1859–1947), from the relationship of between Janet and Freud, to the influence of his dissociation theory on contemporary psychotraumatology.

Divided into three parts, the first section places Janetian psychological analysis and psychoanalysis in context with the foundational tenets of psychoanalysis, from Freud to relational theory, before the book explores Janet’s work on trauma and dissociation and its influence on contemporary thinking. Part three presents several contemporary psychotherapy approaches directly influenced by Janetian theory, including the treatment of posttraumatic stress disorder and dissociative identity disorder.

draws together eminent scholars from a variety of backgrounds, each of whom has developed Janetian constructs according to his or her own theoretical and clinical models. It provides an integrative approach that offers contemporary perspectives on Janet’s work, and will be of significant interest to practicing psychoanalysts, psychiatrists and psychotherapists, especially those treating trauma-related dissociative disorders, as well as researchers with an interest in psychological trauma.

"This volume is as much discovery as rediscovery. Pierre Janet’s true impact is timeless. Why? Because his enduring relational sensibility is in his prescience. The full power of his ‘here-and-nowness’ can best be appreciated by those who are able to recognize how much they need him. In this magnificent volume, both scholarly and personal, Janet’s contribution and the man himself are embodied and come alive in every chapter. It is a book for us, and a ‘must-read’." Philip M. Bromberg, author, Standing in the Spaces: Clinical Process, Trauma, and Dissociation and others

"Pierre Janet’s work, predating Freud’s, was the starting place for the effective treatment of serious mental distress. But Janet’s concepts are not always easy to understand for English-speaking readers or for readers who have not previously been exposed to his work. This volume of collected articles by international experts, edited by Giuseppe Craparo, Francesca Ortu, and Onno van der Hart, rediscovers and elucidates Janet’s concepts, linking them with object relations theory, attachment theory, Ferenczi’s work, Jungian theory, and many other current psychotherapies. Together these articles explain the depth and breadth of Janet’s concepts. Rediscovering Pierre Janet: Trauma, Dissociation, and a New Context for Psychoanalysis is a must read for all interested in psychoanalytic, psychodynamic, cognitive-behavioral, relational, and trauma/dissociation-informed psychotherapies." Elizabeth Howell, PhD, author, The Dissociative Mind and Understanding and Treating Dissociative Identity Disorder: A Relational Approach

"Based on Pierre Janet’s unsurpassed pioneering studies, the editors and authors have realized an excellent book, intended for clinicians and researchers, focusing on the complex links between trauma and dissociation. This beautiful integration of Janet’s work and current understanding is bound to open up new directions in theory and clinical practice. We should be grateful to Giuseppe Craparo, Francesca Ortu, and Onno van der Hart, for this most inspiring work, destined to become a classic of international psychology." Françoise Pasqualin, President of the Association Française Pierre Janet (AFPJ); and Bernard Mayer, co-founder of the AFPJ

, PhD, is a psychologist and full professor at "La Sapienza" University of Rome, has investigated issues concerning the origin of psychoanalysis, emphasizing the points of contact with, and distance from, the theories that the French school, and particularly Pierre Janet, were elaborating. She has devoted a series of studies to the analysis of the Janetian theory and its clinical importance.

The History of Psychoanalysis Series

This series seeks to present outstanding new books that illuminate any aspect of the history of psychoanalysis from its earliest days to the present, and to reintroduce classic texts to contemporary readers.