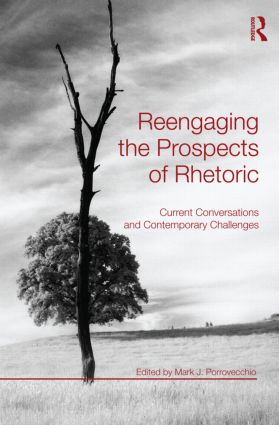 Reengaging the Prospects of Rhetoric

Reengaging the Prospects of Rhetoric reanimates the debate over the function and scope of rhetoric. Providing a contemporary response to the volume The Prospect of Rhetoric (1971), this volume reconceptualizes that classic work to address the challenges facing the study of rhetoric today.

With contributions from today’s leading rhetorical scholars, Reengaging tje Prospects of Rhetoric offers "response" essays to each chapter of the original work. Each scholar uses his/her essay as a forum in which to address three questions:

These provocative engagements suggest that, while the study of rhetoric has gained much ground in the intervening decades, there is more work to be done to reestablish the primacy of rhetoric in contemporary society.

PROLOGUE: THE PROSPECT AS PROSPECTUS by Thomas O. Sloane

CHAPTER 1: KARL WALLACE: BETWEEN PAST AND FUTURE; A Response to Karl Wallace’s "The Fundamentals of Rhetoric" by Stephen Howard Browne

CHAPTER 2: PROSPECTS OF RHETORIC FOR THE 21ST CENTURY: EVENTAL RHETORIC; A Response to Samuel L. Becker’s "Rhetorical Studies for the Contemporary World" by Barbara A. Biesecker

CHAPTER 4: OUR PREMATURE BURIAL; A Response to Lawrence W. Rosenfield’s "An Autopsy of the Rhetorical Tradition" by Robert S. Iltis

CHAPTER 5: THE PROSPECTS FOR PHILOSOPHICAL RHETORIC; A Response to Henry Johnstone’s "Some Trends in Rhetorical Theory" by Steve Fuller

CHAPTER 7: CHAIM PERELMAN’S PROLEGOMENON TO A NEW RHETORIC: HOW SHOULD WE FEEL? A Response to Chaim Perelman’s "The New Rhetoric" by Celeste Michelle Condit

CHAPTER 8: A CULTURAL SOCIOLOGY OF RHETORIC: HUGH DUNCAN’S FORGOTTEN CORPUS; A Response to Hugh Dalziel Duncan’s "The Need for Clarification in Social Models of Rhetoric" by Peter Simonson

CHAPTER 9: RHETORIC AND THE THIRD CULTURE: SCIENTISTS AND ARGUERS AND CRITICS; A Response to Wayne Brockriede’s"Trends in the Study of Rhetoric: Towards a Blending of Criticism and Science" by John Lyne

CHAPTER 10: ‘THE CULT OF UNINTELLIGIBILITY’: CONTINUED QUERIES ABOUT THE NATURE OF OUR DISCOURSE(S); A Response to Barnet Baskerville’s "Responses, Queries, and A Few Caveats" by Mark J. Porrovecchio

CHAPTER 11: READING THE PAST INTO THE FUTURE: CHANGING DISCIPLINARY IDENTITIES IN RHETORICAL STUDIES; A Response to Edward P. J. Corbett’s "Rhetoric in Search of a Past, Present, and Future" by Steven Mailloux

Mark J. Porrovecchio (Ph.D., University of Pittsburgh) is Assistant Professor of Rhetoric and Director of Forensics in the Department of Speech Communication at Oregon State University. His work has appeared in the American Communication Journal, Journal of the Northwest Communication Association, Rhetoric Society Quarterly, and Philosophy in Review/Comptes Rendus Philosophiques, among others.