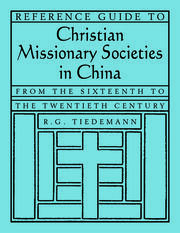 This comprehensive guide will facilitate scholarly research concerning the history of Christianity in China as well as the wider Sino-Western cultural encounter. It will assist scholars in their search for material on the anthropological, educational, medical, scientific, social, political, and religious dimensions of the missionary presence in China prior to 1950.The guide contains nearly five hundred entries identifying both Roman Catholic and Protestant missionary sending agencies and related religious congregations. Each entry includes the organization's name in English, followed by its Chinese name, country of origin, and denominational affiliation. Special attention has been paid to identifying the many small, lesser-known groups that arrived in China during the early decades of the twentieth century. In addition, a special category of the as yet little-studied indigenous communities of Chinese women has also been included. Multiple indexes enhance the guide's accessibility.

Gardiner Means has a secure place in the history of 20th-century economic thought, as the co-author with A.A.Berle of "The Modern Corporation and Private Property". But according to Samuels and Medema, Means should be remembered for major contributions in both micro- and macroeconomics. The authors discuss Means's ideas of administered pricing and profit maximization within the giant corporation, the possible links between industrial structure and macroeconomic performance, a theory of the firm as it relates to the market, and the micro foundations of macroeconomics. Central to Means's macroeconomics is his theory that administered pricing generates inflation and stagflation. Means, in the authors' view, was a seminal thinker and a post-Keynesian economist, as well as an institutionalist. This book also gives an precis of Means's unusual career in government and the academy.