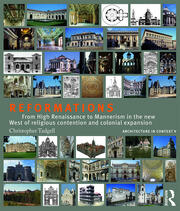 Reformations: From High Renaissance to Mannerism in the new West of religious contention and colonial expansion

Unprecedented in scope, this fifth volume in the Architecture in Context series traces the rediscovery of Classical ideas and the emergence of the great artists and architects of late 15th- and early 16th-century Italy that led to the cultural peak characterized as the High Renaissance.

It begins with a definition of Mannerism, the seminal development from the High Renaissance and the Baroque, associated with such dominant and influential figures as Raphael, Michelangelo, Vignola, Romano and Palladio. The political context within which Mannerism and its variants developed – from the Reformation to the outbreak of the Thirty Years’ War – is outlined before the major figures and achievements of Italian architecture in the period are explored in great depth and breadth. The journey then moves to France and architects and thinkers such as Pierre Lescot, Philibert de l’Orme, J.A. du Cerceau and Salomon de Brosse. These two major traditions – with the intercession of architects from the Netherlands who had ideas of their own – had a huge impact in central Europe, the ideas spreading across a vast area including modern-day Germany, Austria and Poland.

After a digression to the notably eclectic England of Elizabeth I and James I, where pioneers such as Robert Smythson were overshadowed by the towering figure of Inigo Jones, Reformations ends with a survey of architecture in the Iberian peninsula and the colonies of Spain and Portugal, where the powerful influence of the Italian masters met a strong vernacular tradition.

Profusely illustrated and with many specially drawn plans, this is a wide-ranging and detailed guide to the architecture of a period that continues to fascinate and engage us today.

Definitions  Context  Part 1: Seminal Italians  1.1 Inception  1.2. Roman Revival  1.3. Vignola and his Contemporaries in the Orbit of Rome  1.4. The Ducal Architects of Florence  1.5. Sansovino, Sanmicheli and their Venetian Inheritance  1.6. Palladio  1.7. Alessi and his Colleagues in Lombardy  1.8. Rome at the Turn of a New Era  Part 2: Seminal French  2.1. From Misunderstanding to Mannerism under François I  2.2. Mannerism versus Classicism under the Late Valois  2.3. Classicism versus Baroque under the Early Bourbons  Part 3: Orbit of Empire  3.1. Seminal Netherlanders  3.2. Eclectic Germans and their Eastern Neighbours  3.3. Netherlandish Revival  Part 4: Across the Channel  4.1. Elizabethan and Jacobean Eclecticsm  4.2. Inception of Palladianism  Part 5: Beyond the Pyrenees  5.1. Iberia at the Turn of the Renaissance Century  5.2. Advent of Classicism in Portugal and estilo chão  5.3. Spain in Transition: Caroline Renaissance; Philippine Mannerism  5.4. Ascendancy of Madrid and the Spanish estilo desornamentado  5.5. Portugal during the Habsburg Interregnum  5.6.The Spanish Americas  Glossary  Further Reading  Index